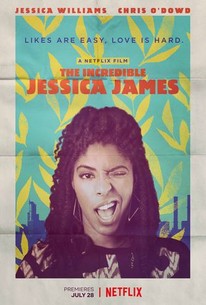 An aspiring NYC playwright (Jessica Williams) gets over a painful breakup by bonding with a man who was also recently dumped (Chris O'Dowd). LaKeith Stanfield and Noël Wells co-star. Written and directed by James C. Strouse.

50 Movies & TV Shows to Netflix and Chill with This Valentine’s Day
The Matrix Trilogy, Bad Santa, Chef, and More on Netflix and Amazon Prime This Week

This movie is surprisingly sweet, bright, and optimistic in all the right places.

There's a power in seeing a self-aware black woman on screen who simply proceeds through life like she hasn't been defeated by it, like she still feels she can make a difference, like she still believes that the world is hers.

A 27-year-old comedian and Daily Show correspondent given ample room to breathe, riff and roar by director Jim Strouse's script, Williams bounds into the proceedings with unfiltered comic peculiarity.

Williams, the 27-year-old former Daily Show correspondent and co-host of the podcast 2 Dope Queens, is so charming that she elevates a perfectly predictable rom-com into a blast.

This is Ms. Williams's movie, and she owns it.

Williams was actually a former correspondent on US programme The Daily Show, but has successfully made the tricky jump to acting look easy. Watch for the chance to see a young actor clearly destined for stardom.

Williams' voracious and unapologetically non-demure performance brings the subtext to the surface. She takes over, defining herself as a star in her first lead role.

Jessica James is kind of obnoxious, mean to her dates, and she's definitely her own biggest fan. But she's 25 and she's trying really hard.

Astute, hilarious, and with an open-endedness that rings true to life, Strouse has gifted us wisdom and one hell of a leading lady in Williams.

I've said this many times in the past, but when people praise Netflix for being the end-all-be-all for the future of entertainment, I just have to disagree. Yes, they have their quality hits like Orange is the New Black or films like Beasts of No Nation, but they also have their share of misses, just like any film studio or distribution company. That being said, their latest release in The Incredible Jessica James is one of the more charming films I've seen them release in quite some time. It doesn't do anything new in terms of storytelling, but when a film can make you feel for the characters and have you moved by the final few moments, then that's a home run in my opinion. This isn't a perfect movie by any means, but it's a great little film worth checking out, and here's why. Simply put, this is an offbeat romance about two people falling for each other after each being part of a break-up. Focussing equally on her love life as it does on her pursuance of becoming a playwright, there is something for everyone to relate to here. Whether you have been in a relationship in the past, are currently in a relationship, or just haven't quite made it where you want to be in life yet, there are many elements about this film that you will most likely enjoy. It also plays with its audience in making them believe they're watching a real scene, only to be fooled that it's a dream/vision, which I found quite funny as the film progressed. Jessica Williams and Chris O'Dowd share much more chemistry than I was expecting them to and that made the film worth watching more than anything, but that's also due to the fact that Jessica Williams delivers a stellar performance here. This is the first starring role I've ever seen Jessica Williams in, and to be quite honest, I can't wait to see more of her in the future. Not that she delivers an Oscar-worthy performance per say, but her commitment to this character really made me believe her actions were genuine throughout the film. When a film centres itself around one main character, it's imperative that the actor/actress gives their all. Whether or not you're supposed to like the character or not is irrelevant, because if you love them or even hate them as the character, they've done something right. What blew me away even more, was the fact that everyone seemed to be giving just as much dedication as her. I seem to be speaking a lot about the performances here, but that's where the praise of this film deserves to be, as well as the complaints. This is a movie about characters, period. If the characters don't have you buying into them then your experience with this movie will more than likely be a poor one. I found myself white-heartedly invested in where these characters were going to end up and the writing of this film felt very natural. That being said, there were almost too many scenes of natural-esque conversations between people that it almost began to feel unnatural at times. It felt as though the script (written by Jim Strouse, who's also the director) was too comfortably written, as though he was in a very relaxed mood when writing. This took absolutely nothing away from the film in terms of enjoyment, but it bugs me upon reflection. Quite honestly, I hadn't even heard about this film until recently, but the idea of it intrigued me enough to check it out on day one. Happily, I can say that this was a surprisingly very well-made movie that I will come out of 2017 remembering. It doesn't do anything mind-blowing or have any real twists to make it stand out, but it's in the subtitles that this film shines. For film fans in general, there are some very clever storytelling tactics used here and I can easily recommend this film to those of you who may be flipping through the Netflix catalogue this weekend. The Incredible Jessica James won't be known as one of the greatest films of the year, but I thoroughly enjoyed my viewing of it.