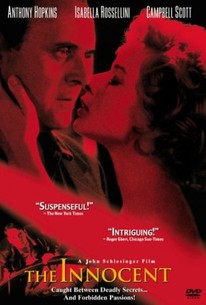 Though directed by John Shleisinger, adapted from a book by popular British author Ian McEwan and featuring an international all-star cast, The Innocent was only given a limited release before it was relegated to video. Set in a misty Cold-War-era Berlin, it is the tale of a rather naïve British telephone tapping expert (played by American actor Campbell Scott, son of George C. Scott) who is seduced by an enigmatic Italian beauty (Isabella Rossellini) who may or may not be working for the Russians. The Brit is mentored by an American spy (played by British actor Sir Anthony Hopkins) in charge of completing a secret tunnel beneath the German city that will allow the Allied nations to tap into East German/Russian phone lines.

Christine Gerlach
as Woman With Dog

Jeff Seyfried
as US Guard

John Scott
as US Guard

Kelly Cole
as US Guard

Arnold Strong
as US Guard
View All

Critic Reviews for The Innocent

A convoluted but not very credible spy story about Cold War intrigue in Berlin in 1955.

I found the movie more intriguing than finally satisfying; because it kept spinning off-center, kept changing the rules of its game, however, it was never boring.

There are no featured reviews for The Innocent at this time.