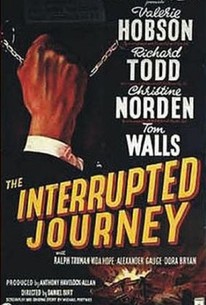 Intending to run off with the wife (Christine Norden) of his publisher (Alexander Gauge), novelist John North (Richard Todd) thinks the better of it as he sits in the compartment of a speeding train. North's journey is interrupted (hence the title) by a train crash, in which his lover is killed. Sifting through the wreckage, railroad inspector Clayton (Tom Walls) discovers that the dead woman didn't perish in the crash: someone shot her in the back! That's all the information that can be revealed without giving away the ending. Top billed in Interrupted Journey as Richard Todd's patient, supportive wife is Valerie Hobson, whose patience and support would be sorely tested in real life when she stood by her husband John Profumo during the British Parliament sex scandals of the early 1960s.

Gwyneth Vaughan
as Girl with the Soldier
View All

Critic Reviews for The Interrupted Journey

There are no featured reviews for The Interrupted Journey at this time.