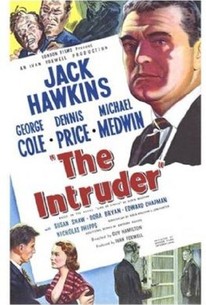 Jack Hawkins plays a former British army officer who is surprised in his home one evening by a burglar. His surprise is compounded when the intruder turns out to be one of the men from his World War II army unit. With the straight-arrow diligence of a wartime commander, Hawkins delves into the unfortunate burglar's past, trying to discover why so promising a soldier hit the skids. The film is not so much a mystery but a genteel expose of the socioeconomic problems facing discharged servicemen in postwar England. The Intruder was adapted by Robin Maugham (son of Somerset Maugham) from his own novel Line on Ginger.

Richard Morris
as Dickie
View All

Critic Reviews for The Intruder

To turn to more cheerful things I am overjoyed to say that The Intruder, based on a novel by Robin Maugham, is an extremely good British picture, acted extremely well by a uniformly talented cast and admirably directed by Guy Hamilton.

There are no featured reviews for The Intruder at this time.