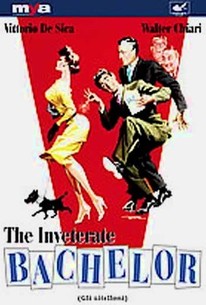 A womanizing bachelor with a cynical outlook on marriage urges a young salesclerk to avoid tying the knot with his landlady's daughter in this comedy starring Vittorio De Sica and Walter Chiari. Luigi (De Sica) believes that marriage is a scam. He's doled out so much advice on the matter that he's earned the nickname "The Professor," and when smitten salesclerk Marcello (Walter Chiari) begins falling for his landlady's daughter, he comes to Luigi in search of advice. Though the Professor urges Marcello to get out of the relationship while he still can, it isn't long before wedding bells are ringing and Marcello is a walking down the aisle. When his new life turns into a waking nightmare, Marcello snaps and gets arrested for the murder of his wife and mother in law. But things aren't always what they seem in Marcello's world, and it doesn't take long for the truth to come out. ~ Jason Buchanan, Rovi

Critic Reviews for The Inveterate Bachelor

There are no critic reviews yet for The Inveterate Bachelor. Keep checking Rotten Tomatoes for updates!

There are no featured reviews for The Inveterate Bachelor at this time.