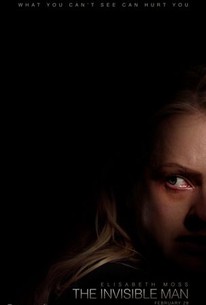 Critics Consensus: Smart, well-acted, and above all scary, The Invisible Man proves that sometimes, the classic source material for a fresh reboot can be hiding in plain sight.

Critics Consensus: Smart, well-acted, and above all scary, The Invisible Man proves that sometimes, the classic source material for a fresh reboot can be hiding in plain sight.

Critic Consensus: Smart, well-acted, and above all scary, The Invisible Man proves that sometimes, the classic source material for a fresh reboot can be hiding in plain sight.

Trapped in a violent, controlling relationship with a wealthy and brilliant scientist, Cecilia Kass (Moss) escapes in the dead of night and disappears into hiding, aided by her sister (Harriet Dyer, NBC's The InBetween), their childhood friend (Aldis Hodge, Straight Outta Compton) and his teenage daughter (Storm Reid, HBO's Euphoria). But when Cecilia's abusive ex (Oliver Jackson-Cohen, Netflix's The Haunting of Hill House) commits suicide and leaves her a generous portion of his vast fortune, Cecilia suspects his death was a hoax. As a series of eerie coincidences turns lethal, threatening the lives of those she loves, Cecilia's sanity begins to unravel as she desperately tries to prove that she is being hunted by someone nobody can see.

News & Interviews for The Invisible Man

View All The Invisible Man News

Critic Reviews for The Invisible Man

A thriller whose mandate is to startle its audience with surface-level shocks while simultaneously subverting expectations in a deeper way, dropping us out of our comfort zone toward some sunken place.

There's a lot more to think about than a typical horror film. It's a real psychological thriller...a good strong film, not SCARY scary, but it gets in your head.

The prize asset is Moss, of course, a seven-octave actor equally happy with micro-emotion and going very big indeed.

In their re-imagined The Invisible Man, filmmaker Leigh Whannell and actress Elisabeth Moss attack the patriarchy and affirm rich white tech bros as the enemy.

Ultimately, The Invisible Man makes for a pacey, if mostly predictable, reimagining of a classic Hollywood horror terror.

[Elizabeth Moss is] amazing and she does so much just with her eyes. It's a really demanding role physically [and] emotionally; it's a huge range she has to play.

Small details... give weight to a story about an immaterial person. [Full review in Spanish]

He (Whannell) uses the cinematic language to his advantage, moving the camera in ways which show that he is in complete control of his audience.

Though influenced by the earlier film, Writer-Director Leigh Whannell reworks outdated elements and comes up with a surprisingly relevant take on the powers provided by invisibility.

It's fast and violent but crystalline in clarity...letting us experience the violence, shame, confusion, and anger that Cecilia does rather than explaining it to us.

From the film's opening titles you can tell you're in for something special.

There are no featured reviews for The Invisible Man at this time.