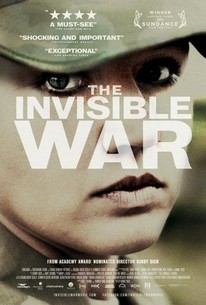 Critics Consensus: The Invisible War is a vital and frank expose on sexual assault in the U.S. military, shot by master filmmaker Kirby Dick (This Film is Not Yet Rated).

Critics Consensus: The Invisible War is a vital and frank expose on sexual assault in the U.S. military, shot by master filmmaker Kirby Dick (This Film is Not Yet Rated).

Critic Consensus: The Invisible War is a vital and frank expose on sexual assault in the U.S. military, shot by master filmmaker Kirby Dick (This Film is Not Yet Rated).

The Invisible War is a groundbreaking investigative documentary about one of our country's most shameful and best kept secrets: the epidemic of rape within our US military. Today, a female soldier in Iraq and Afghanistan is more likely to be raped by a fellow soldier than killed by enemy fire with the number of assaults in the last decade alone in the hundreds of thousands. Focusing on the powerfully emotional stories of several young women, the film reveals the systemic cover up of the crimes against them and follows their struggles to rebuild their lives and fight for justice. The Invisible War features hard-hitting interviews with high-ranking military officials and members of Congress that reveal the perfect storm conditions that exist for rape in the military, its history of cover-up, and what can be done to bring about much needed change. -- (C) Official Site

News & Interviews for The Invisible War

View All The Invisible War News

Critic Reviews for The Invisible War

The Invisible War is as compelling as Silence in the House of God, Alex Gibney's study of abusive Catholic priests.

Kirby Dick's typically insightful and compassionate documentary presents a harrowing picture of an epidemic of sexual assault and rape within the US military.

The film works both as advocacy and as a very moving study of women (and one or two men) whose idealism and patriotism have been utterly shattered.

What calibre of male personnel is the military attracting? And how will this dysfunction affect its relations with foreign civilian populations? It is a grim picture.

Tears are not hard evidence, but they are hard to resist as anecdotal testimony.

I can hardly wait to see which closet Dick will throw open next.

Not just an important film, but one produced at the top of its creators' craft. It's a doc of rich emotion and high stakes that, thanks to its intrepid subjects, has a real chance to make a difference in the lives of future US soldiers.

Although The Invisible War hardly breaks the mould in its execution, it makes for compelling -- if appalling -- viewing.

"The Invisible War" is infuriating, but in a positive way.

This is a horrifying situation.

Where this picture is truly triumphant, is within the significance of its very existence. This film simply needs to have been made, and it needs to be seen.

Audience Reviews for The Invisible War

Well, there's the good part of the American experiment, and then there's the rest. This is a piece about some of that other, wherein representatives of the land of the free and home of the brave justify rape by your colleagues as simply an "occupational hazard". A national disgrace, not only for the crime against our sons and daughters but more so for the sanctioned cover-up after the fact, protecting the abusers. Got a Leave it to Beaver view of America, of its military (the highest example of The Dream), then this is not for you.

Trigger Warning: descriptions of women going through reporting after sexual assault. Though I knew a bit about the inner workings of the US military, their treatment of women was a complete mystery. It turns out, female soldiers are treated as commodities even when they are risking their lives for this country. Not only that, but women in the military are forced into silence and their assailants go unconvicted. Various women come forward to tell their horrifying stories in this film, and the way they were mishandled by the military is terrifying. The system in place is hurting, and giving PTSD, to hundreds of thousands, if not millions, of women, and it needs to end permanently. This is a seriously emotional look into an institution that devalues women and, worst of all, creates an environment where women feel unsafe. These women joined the military to serve their country, but by the end of the film they hate the institution that they triumphed. That, above all else, is the most disheartening thing to see.

Disturbing and maddening, Kirby Dick's "The Invisible War" is an unfortunate document on the rampant rape and sexual violations that occur within the U.S. military, and how a corrupt system allows such acts to go unpunished on a continuous basis. Dick keenly steps aside and allows the victims of these atrocities and their gut-wrenching testimonies to be the heart of the film... rendered in the simplest, most straightforward of fashions. Much to nearly all of the visual inventiveness and on-screen director input present in "This Film is Not Yet Rated" (a great film also by Dick) has been stripped away and the film is more unshakable because of it. This is indeed heavy, uncomfortable content, but a powerful account that should be considered mandatory viewing for every single man and woman considering a career in the U.S. armed forces. It's sure to change a mind or two.

A disturbing and essential documentary that exposes the outrageous and horrifying rape and cover-up inside the US military, leading to numerous lives ruined by psychological damage - which hopefully will make women rethink before joining the armed forces.