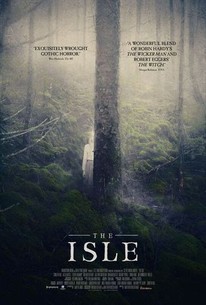 Based loosely on Scottish ghostly folklore with inspiration from Greek sirens, the tale is set in 1846 on a remote island off the west coast of Scotland, where three survivors from a mysterious sinking of their merchant ship find themselves stranded on a small misty isle. The isle's four sole secretive residents, an old harbor man, a farmer, his niece and a young mad woman, are anything but welcoming and reluctant to aid the sailors back to the mainland. The promise of a boat never materializes leading one of the sailors to question why people had abandoned the island. Through his investigation he discovers that every year around the same date a tragedy at sea would occur and young men from the island would perish. When his two shipmates meet with fatal accidents, the myth of a ghostly siren haunting the island leads him to try and uncover the truth.

Critic Reviews for The Isle

An intriguing work, modestly and intelligently conceived, a supernatural melodrama characterised by an eerie sort of restraint.

The picture's a pleasure to watch throughout, largely because of Eilean Shona.

Low-budget earnest but bland attempt at a horror/suspense thriller that just can't overcome a stale, predictable and unimaginative plot.

An eerie and unnerving drama

An atmospheric and intriguing story, with stunning visuals and music.

... ultimately more menacing for its creepy atmosphere than anything else.

I found myself mostly unimpressed. In fact, it felt like a predictable B movie from the 1950s, albeit with much better special effects.

The film is beautifully shot...as beautiful as a foggy isle gets. The costumes and sets feel real for the period and the environment, which is remarkable for low-budget filmmakers to pull off.

Audience Reviews for The Isle

There are no featured audience reviews yet. Click the link below to see what others say about The Isle!