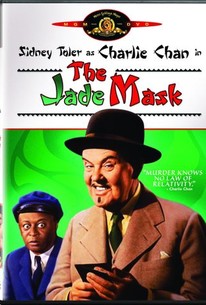 An engagingly silly Charlie Chan whodunit from Poverty Row company Monogram, The Jade Mask mixed science fiction with Old House melodramatics and a generous dose of comedy. The venerable Chinese detective (Sidney Toler) is this time assigned by the government to establish the whereabouts of Harper (Frank Reicher), a scientist experimenting with a formula that may turn wood into solid steel. Harper, of course, turns up very much murdered and his strange house is virtually teeming with suspects. There is the dead man's Mrs. Danvers-like sister (Edith Evanson), a vaudeville strongwoman (short subject regular Dorothy Granger), the ubiquitous British-accented butler (Cyril Delevanti), and a mute garage mechanic (Lester Dorr). Several additional murders occur right under Chan's nose -- which nobody seems to particularly mind, least of all hayseed sheriff Al Bridge -- and corpses appear to be walking up and down staircases. Despite interference from manservant Birmingham Brown (the always welcome Mantan Moreland) and the inevitably dense Number Four Son (Edwin Luke), good old Charlie manages to catch the killer -- or killers -- within the allotted 66 minutes. Moreland and Luke, the real-life brother of Number One Son Keye Luke, perform their usual comedic asides, but the best lines are awarded to Preston Sturges stock-company regular Al Bridge as the plainspoken, homily spouting sheriff. Incidentally, although masks are indeed featured in The Jade Mask, none of them is made of jade.

Henry Hall
as Godfrey
View All

Critic Reviews for The Jade Mask

There are no critic reviews yet for The Jade Mask. Keep checking Rotten Tomatoes for updates!

Audience Reviews for The Jade Mask

This is my first watch of a Charlie Chan Film, and it will not be my last. This film as enjoyable throughout, being filmed in 1944 is something one needs to remember. Charlie Chan being played by a Anglo American with his eyes pinched back with a real Asian son made me laugh at what Hollywood would do in the old days, the same principle as whites playing native Americans in westerns. Charlie is suppose to be from Hawaii working for the US Government to discover who killed the scientist working on a secret formula for Uncle Sam. Mantan Morland playing Birmingham Brown reminds us how funny early black comedy was, I have to give it 4 Stars

wouldn't it be a strange thing coming from a chinese? that i actually feel sidney toler's charlie chan is actually more fun than sherlock holmes. and i do wonder why people would consider it deragatory to chinese. but to me, i don't see charlie chan is so different from jackie chan. whether it's charlie chan or jackie chan, it's all based upon a user-friendly oriental stereotype, the easterner who's willing to embrace american assimilation and use his talent to serve the great big white world. charlie chan always smiles when he's handling a case, and one of his sons and an african american assistant would accompany him and make an embarrassign spectacle of themselves. of course, charlie chan's english is also deliberately "exotic", such as "your bank not desire", that sort of chinese english (i wonder whether i make any similar mistake to a milder degree)...i suppose what offends most would be: why cast a caucasion to play a chinese and chinese is not good enough to play a leading chinese role??? but i don't see the situation changes so much, see jackie chan and his hollywood movies, especially rush hours franchise. what's so different? hollywood just replaces a caucasion actor to play a yellow-face stereotype? see the mummy 3? what's so different between jet li's emperor and the insidious dr. fu manchu? frankly, to me, it's more disturbing to see a chinese playing a yellow-face role than watching a campy caucasion trying to be chinese. the latter, at least, has a mischievous pleasure to cheer for its blatant artifice. unlike the celibacy of the hard-boiled philip marlowe or straight-laced holmes, charlie chan is a family man who goes everywhere with any one of his sons and his black assistant, and he encourages people to do good, sometimes he even behaves like a matchmaker to set couples together. i suppose what bothers the oriental audience is that he's sort of de-sexualized without that sort of sexual magnetism philip marlowe or sherlock holmes projects (i'm speaking of basil rathbone's holmes). but he doesn't go around to wisecrack and purposely infuriate people like the cocky marlowe, chan just performs his job wisely even with family members and friends around. one principle in the detective novels would be the phallic detective has to remain in celibacy and un-conquered by any femme fatale so he could focus on his cases wholeheartedly. besides, there's a misogynistic undertone in marlowe or holmes, they consider women the catalysis of evil or corruption, despite their attractions to the belle, they have to reject them or sometimes even bombard them with contempt as if turning women down is a way to demonstrate their manhood. but we don't see any that sort of conflicts in charlie chan. i don't see people discriminate him due to his race except chan's strange english is frequently a laughing topic in this franchise. what's so negative about a chinese detective who doesn't go around offending people? i think that could be considered an idealized western perception over the east: the cooperative orient, tamed and docile. but even in the orient, the culture expects such attributes from any cultured and educated gentlemen in bourgeois or artistocratic society. what's wrong with a man who accepts the constitution of marriage and obligation of family and kids? isn't what grown man's supposed to do to make the world proceed? why detective has to remain in celibacy to be a hero or solve a case? i think the void here is a lack of a phallic figure, a reckless rebel to defy the society. and chinese, as a race not of great significance then in america, is deprived of such niche of heroic swagger. maybe i don't find charlie chan so insulting because i'm not a man. but now i could understand charlie chan's existence in its time. it's like someone tries to tell you that i admire your humility, your wisdom and your culture, so i make a figure called charlie chan as compliment. but all you could see is an emphasis of social insigficance and distorted commodification despite the compliments sound positive but you ain't so flattered. just like someone says "oh, your jewery is nice, it looks so chinese"..should you be happy? wouldn't you doubt that you're praised as an exotic spectacle or as a human being with good taste?? that sort of phobia tends to drive lots of people to de-orientalize themselves or help louis vutton to sell more bags so they could prove they're the higher-class well-to-do eastners instead of the poor farmer who suffers from famine in pearl s buck's "the great earth"... anyway, that's a whole lot of jokes to me. charlie chan is camp and i enjoy it. the world is already absurd in every sense, why so serious?

OMG Charlie Chan was my altime saturday morning favourite. I loved him and his No1 son....stupid films but really enjoyable.