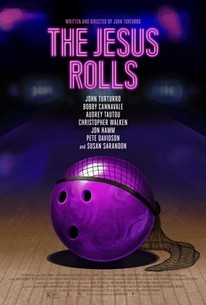 Critics Consensus: The Jesus Rolls limply into the gutter in its misguided attempt to belatedly explore the saga of a supporting character better left on the margins.

Critics Consensus: The Jesus Rolls limply into the gutter in its misguided attempt to belatedly explore the saga of a supporting character better left on the margins.

Critic Consensus: The Jesus Rolls limply into the gutter in its misguided attempt to belatedly explore the saga of a supporting character better left on the margins.

Hours after being released from prison for good behavior, Jesus Quintana (John Turturro) reunites with his best friend and fellow underachiever Petey (Bobby Cannavale). In the first in a series of rapidly escalating bad decisions, they steal a vintage car parked in front of an upscale salon and hit the road for a no-holds-barred joyride -- until the car's gun-toting owner (Jon Hamm) catches up with them, wounding Petey. Fleeing the scene with fiercely free-spirited shampooist Marie (Audrey Tautou), Jesus and Petey continue their adventure in a series of stolen cars, cementing their partnership with an epic petty-crime spree and a three-way romance. A darkly funny, irreverent and freewheeling road movie, The Jesus Rolls is written and directed by Emmy (R) winner and nominee John Turturro and pays tribute to the classic French farce Les Valseuses.

News & Interviews for The Jesus Rolls

View All The Jesus Rolls News

Critic Reviews for The Jesus Rolls

Fair play to Turturro for going in such a strange direction, and assembling a pretty killer cast, but it's unlikely to satisfy even the most ardent Quintana enthusiast.

Choppiness is the real issue. There are baffling shunts from town to country, while the middle stretch tosses up scenes with no real function or punchline.

No amount of added context can override the feeling that the Jesus was never meant to be more than a one-joke character.

The Jesus Rolls only gets more seductive as it ambles towards oblivion and textures its story with a gentle sense of cosmic justice... and its genial vigor gradually comes to excuse Turturro's abject lack of style.

It is very odd and not very good, but occasionally it ends up being charming in a goofy, almost innocent sort of way.

It's hard to make a movie about annoying wanderers interesting, engaging, or realistic -- three words no one would use to describe this film.

Ill-advised sequel has no idea what it is, why it exists or who it's for.

It'll take more than a few White Russians to wash The Jesus Rolls down.

Tonal atrocities abound in this pointless amalgam of a Big Lebowski side-quel and an age-inappropriate remake of the 1974 French film Going Places. The cameo-filled The Jesus Rolls fails both of its sources, yet also manages to fail on its own terms.

If something is anything less than a trifle, The Jesus Rolls is definitely it.

A curate's egg, let down by juvenile humour, a pungent whiff of self-indulgence, and a dark turn that almost sends it careering off the road.

From one desperate misfire of a gag to another, with occasional detours into sometimes tragic seriousness, everyone flails around trying to make it work. It doesn't.

There are no featured reviews for The Jesus Rolls at this time.