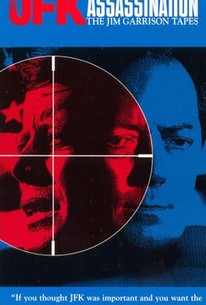 This documentary tells the story of District Attorney Jim Garrison, who -- after the 1963 assassination of President John F. Kennedy -- looked closely into evidence available to him and came forward with an interpretation that went beyond the Warren Commission's authorized report. The film examines occurrences before and after the assassination and considers theoretical connections with the FBI, the CIA, the Mafia, the Cuban situation, the war in Vietnam, and other national and international concerns. An interview with Garrison is included in the film. Footage of the tragedy and interviews with witnesses offer further information and ideas.

Critic Reviews for The JFK Assassination: The Jim Garrison Tapes

There are no critic reviews yet for The JFK Assassination: The Jim Garrison Tapes. Keep checking Rotten Tomatoes for updates!

There are no featured reviews for The JFK Assassination: The Jim Garrison Tapes at this time.