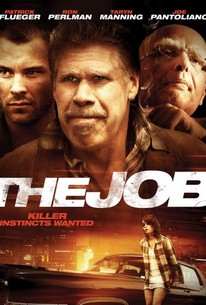 Ron Perlman, Joe Pantaliano, and Taryn Manning star in director Shem Bitterman's adaptation of his own award-winning play about an unemployed man who wrestles with his conscience after accepting a job that poses a serious moral dilemma. Bubba Brady (Patrick Fleuger) is searching for work, but every lead he finds just takes him to another dead end. Then he meets Jim (Perlman), a carefree vagrant touting a golden opportunity with a mysterious, cigar smoking man named Perriman (Pantaliano). The pay is good; unfortunately the job entails murdering a man who's been skimming profits from a powerful gangster. With the $200,000 he would earn from taking the job, Bubba could finally give his girlfriend Joy (Manning) the life they've always dreamt about. Now, if Bubba can just switch off his conscience and embrace his inner-killer, he'll be on the fast track to financial freedom in no time. Of course that's easier said than done, and when the time comes to carry out the job, Bubba ponders the prospect of outsourcing the hit to his old pal Jim, who never let a moral quandary prevent him from collecting a big paycheck.

Critic Reviews for The Job

There are no critic reviews yet for The Job. Keep checking Rotten Tomatoes for updates!

Audience Reviews for The Job

There are no featured audience reviews yet. Click the link below to see what others say about The Job!