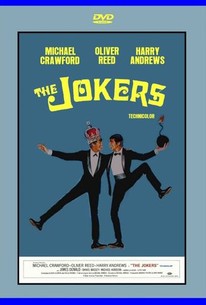 Two brothers looking to avoid becoming pawns of the establishment come up with a better way of making a living -- through theft -- in this satiric comedy. David Tremayne (Oliver Reed) is a successful London architect, and his younger brother Michael (Michael Crawford) is weighing his options after being kicked out of school. The brothers share a bemused disgust with the world around them and a desire to get through life without the burden of labor; toward this end, one day they begin plotting an elaborate scheme to steal the British Crown Jewels. Mind you, they don't intend to sell them, or even keep them very long -- the idea is to return them after a week, simply to prove that it could indeed be done, and make themselves famous in the process. After studying the procedures of Scotland Yard's Bomb Disposal Unit, the inner working of the Tower of London's Jewel Room, and the London ambulance services, the Tremaynes come up with a foolproof plan -- they call in a bomb threat to the Tower, and they are able to enter the Jewel Room posing as men from the bomb squad. They then feign injury and are able to escape in an ambulance. It all seems simple enough, and it actually works, until Michael "forgets" his part of the agreement to take half of the responsibility for the theft. The supporting cast includes Edward Fox, Frank Finlay, and Harry Andrews. ~ Mark Deming, Rovi

Critic Reviews for The Jokers

Resilient script... erratic direction, in the fashionable jumping-bean, all over the place style.

Audience Reviews for The Jokers

Well-made, fun, accessible film with a great plot and two well-known stars (Oliver Reed, Michael Crawford). And it keeps you delightfully hanging in suspense until the very last minutes. Can't understand why this film is so obscure.