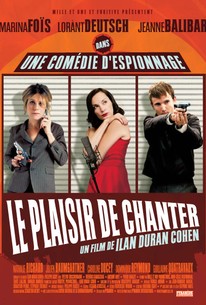 A missing USB stick housing some volatile uranium secrets serves as the catalyst for insanity in director Ilan Duran Cohen's cartoonish, madcap caper. Eve (Evelyene Kirschenbaum) is a vocal coach who gives lessons out of her home. Constance (Jeanne Balibar), Anna (Caroline Ducey), and Julien (Julien Baumgartner) are two of her students. Constance's husband Hans has just been murdered by some unidentified characters seeking a USB stick that could be extremely valuable to both the Russians and the Mossad. Lately, Constance's shady sister-in-law Noemie (Nathalie Richard) has gone into partnership with local radiologist Reza (Frederic Karkosian), who moonlights as a terrorist. Both Noemie and Reza are sleeping with Julien. Meanwhile, a quick thinking French intelligence chief instructs agents Philippe (Lorant Deutsch) and Muriel (Marina Fois) to stake out Eve's lessons and press Constance for information. Who has the missing USB stick, and where are they hiding it? As the race to recover the information gets underway, everyone becomes a suspect. ~ Jason Buchanan, Rovi

At times serious, others farcical, it's a film that ignores expectations and creates an experience that's like a helium balloon. It slowly lets itself out before finally settling.

There are no featured audience reviews yet. Click the link below to see what others say about The Joy of Singing (Le Plaisir de Chanter)!