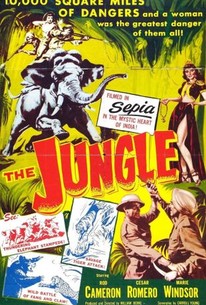 This Lippert release teams studio "regulars" Cesar Romero and Marie Windsor with Monogram's Rod Cameron. The three stars head to India to investigate reports that the elephant population is being terrorized and stampeded by prehistoric mammoths. There's lots of lovely scenery and fascinating glimpses of Indian wildlife, but not much in the way of plot, nor is a plot really called for under the circumstances. Largely filmed on location in India by Voltaire/Modern Theatres Ltd. Productions, the American version of The Jungle runs 74 minutes, while the Indian release version reportedly ran twice that length!

Sulochana
as The Aunt

Chitra Devi
as The Dancer
View All

Critic Reviews for The Jungle

Audience Reviews for The Jungle

There are no featured audience reviews yet. Click the link below to see what others say about The Jungle!