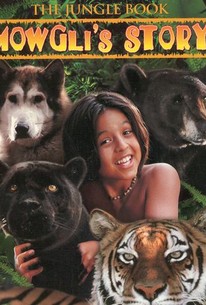 Nick Marck directs this sequel to Disney's 1994 live-action adaptation of Rudyard Kipling's The Jungle Book. Released in 1998, Jungle Book: Mowgli's Story is a prequel to the original, following the early adventures of Mowgli and his animal friends. Taking on the role previously played by Jason Scott Lee, Brandon Baker dons the loincloth of the preadolescent Mowgli in this straight-to-video family film. Jungle Book: Mowgli's Story also features performances by Dee Bradley Baker, Myles Jeffrey, and Ashley Peldon, and is narrated by The Wonder Years' Fred Savage.

Wallace Shawn
as Tarzan the Chimp

Clunky jungle sequel has loss of parent and some peril.

There are no featured reviews for The Jungle Book: Mowgli's Story at this time.