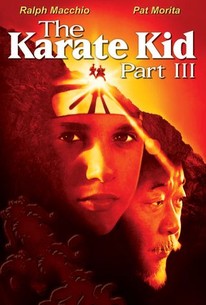 Critics Consensus: Inspiration is in short supply in this third Karate Kid film, which recycles the basic narrative from its predecessors but adds scenery-chewing performances and a surprising amount of violence.

Critics Consensus: Inspiration is in short supply in this third Karate Kid film, which recycles the basic narrative from its predecessors but adds scenery-chewing performances and a surprising amount of violence.

Critic Consensus: Inspiration is in short supply in this third Karate Kid film, which recycles the basic narrative from its predecessors but adds scenery-chewing performances and a surprising amount of violence.

John G. Avildsen rehashes his shopworn formula for another go-round in The Karate Kid Part III. Going against the wishes of his mentor, Mr. Miyagi (Noriyuki "Pat" Morita), Daniel (Ralph Macchio) will defend his karate title in an All-Valley Championship match arranged by his nemesis Kreese (Martin Kove), whose karate studio folded after his star student lost the championship to Daniel. Kreese's friend, Vietnam veteran and toxic waste dumper Terry (Thomas Ian Griffith), agrees to help his old pal regain the championship trophy. Daniel's rival Mike Barnes (Sean Kanan) is known as "the bad boy of karate," and Daniel feels he requires more training to vanquish him. But Mr. Miyagi refuses to help Daniel train for the tournament: "Karate to defend life and honor means something. To defend a plastic trophy means nothing." As a result, Daniel naïvely falls into the clutches of Terry, who takes him on as a karate student. But after Daniel finds himself trapped at the bottom of a cliff and Daniel's girlfriend, Jessica (Robyn Lively), has her life threatened, Mr. Miyagi realizes the bad guys have gone too far and agrees to coach Daniel for the tournament. ~ Paul Brenner, Rovi

Glenn Medeiros
as Himself

The Karate Kid Part III is a brave but misguided attempt to restate the lesson through a narrative ploy that nearly always works, but here produces no more than recycling.

Part III, however, is not merely a disaster of the most uninspired contrivances but is actually unsuitable for youngsters, the series' natural audience.

About all that enlivens The Karate Kid Part III is a screamingly over-the-top performance by Thomas Ian Griffith, who plays a toxic waste magnate and karate buff who hatches a madly complex plot to humiliate Daniel and his teacher.

The pattern has so calcified that Gene Autry westerns seem like models of moral complexity by comparison.

The makers of The Karate Kid Part III -- also responsible for its successful predecessors -- have either delivered or taken a few too many kicks to the head along the way.

Where the original Karate Kid was a fresh and charming film, and the second a dud-clone, the only word for this third installment is stupefying.

The script takes leave of reality at an early stage, and it all becomes increasingly daft and humourless with each scene.

A rather vicious melodrama and morality play that will bore most kids silly.

Griffith's over-the-top toxic-waste king [is] an unbelievably sadistic type who enjoys tilting his head back to laugh maniacally every three minutes or so, and who is one of few signs of life in this brain-dead movie.

The Karate Kid Part III is a slickly produced adventure of the most simple-minded kind.

Karate Kid III has emerged as the front runner for the worst sequel of the summer.

Third entry of The Karate Kid series is already a sign that it is too much and it shows the familiar elements of previous films in the series. The script is horrible, the plot suffers greatly, and the acting and directing are not up to par. There really is no need for a third sequel because part 2 was already pretty bad and pointless. This film lacked a truly engaging plot, great acting and good, memorable moments. The third film is a horrible, dull experience and it doesn't do anything to entertain you. Fragments of the original plot are still here, but the film lacks in new, effective ideas that really works. I hated the film, was really bored with it, and just when you think the franchise would get worst, they filmed The Next Karate Kid, which was awful, and went where the previous films went. The only difference is, the first one was a great, well written, memorable and fun picture that was compelling; however these films fail to deliver the magic that the original did. Poor acting, with a poor script and top it off with poor, sketchy directing from director John G. Avildsen, who directed the first one, it's a shame that he couldn't recapture the moments of the original. This is a bland addition to the series that isn't worth checking out. This third film adds nothing truly compelling, and I truly hated this film, and it's even clearer that sequels to the original were not necessary whatsoever. Watch with caution.

Pretty much as good as the first one. Two real badasses here...

A so-so third effort as the original rival sensi from the first wants help from his old army buddy to get revenge.

Again not as good as the first, of course, but its still actually quite good, getting alittle samey with the plot but it still works and lifts you by the end. The baddies still work well and the return of kove actually gives the whole thing a complete feel. It looks alittle TV movieish this time but the different fighting styles confronting Daniel make it interesting and overall completes the trilogy well.