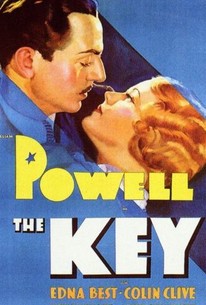 The Key is a story of the Irish "troubles" which avoids taking sides, but spends most of its screen time with the British occupation troops. William Powell stars as a soldier for hire who works on behalf of the British in the Dublin of the early 1920s. Powell is as celebrated for his boudoir antics as his bravery, so it's no surprise that he soon takes up with the wife (Edna Best) of his best friend, British intelligence officer Colin Clive. The plot thickens when Clive is captured by the Irish freedom fighters, to be released only on condition that Irish patriot Donald Crisp is not hanged. Powell makes up for his past indiscretions by rescuing Clive from his captors. ~ Hal Erickson, Rovi

James May (I)
as Driver

Edward Cooper
as Lloyd
View All

Critic Reviews for The Key

There are no critic reviews yet for The Key. Keep checking Rotten Tomatoes for updates!

Audience Reviews for The Key

There are no featured audience reviews yet. Click the link below to see what others say about The Key!