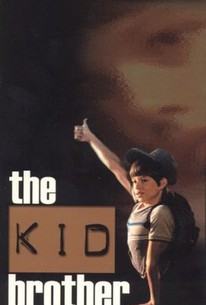 Kenny is a Canadian kid who has a couple of pals and, like a lot of the other lads, idolizes the jock his pretty older sister has chosen as her boyfriend. However, Kenny was born without legs or even the lower part of his body. He gets around (quite well, in fact) on his arms. He has been given a prosthesis that makes him look "normal," but he protests, rightly, that it was made so as to keep other people from getting upset at the sight of him -- it only slows him down. When his sister runs away during the filming of a documentary about how his family has coped with his handicap, he embarks on a solo journey to Philadelphia to find her. There, she pours out her heart, complaining that everything she values in her life has been turned inside out so as to serve and support her legless brother.

Critic Reviews for The Kid Brother

There are no critic reviews yet for The Kid Brother. Keep checking Rotten Tomatoes for updates!

Audience Reviews for The Kid Brother

There are no featured audience reviews yet. Click the link below to see what others say about The Kid Brother!