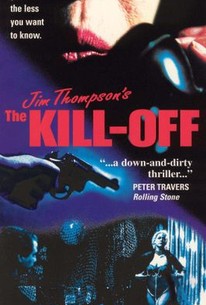 The Kill Off Photos

The early 90s saw a small surge of interest in the writings of noir author Jim Thompson. Stephen Frears' The Grifters got plenty of recognition. Jim Foley's adaptation of After Dark, My Sweet was criminally under-appreciated, but director-screenwriter Maggie Greenwald's (The Ballad of Little Joe) low budget feature debut, The Kill-Off, was completely overlooked. Most viewers saw the film for the first time when it premiered on the Sundance Channel, more than ten years after its theatrical release. Greenwald's film begins with small town gossip queen Luane (Loretta Gross) driving a woman to suicide with the venomous rumors she spreads over the phone. This earns Luane the enmity of the local doctor, whose son Bobbie (Andrew Lee Barrett) is a drug dealer. Bobbie has a thing for Myra (Jorjan Fox), whose father, Pete (Jackson Sims) owns a failing bar, The Pavilion. But when Pete finds out (thanks to Luane) that Bobbie is dealing drugs out of the bar, he warns him to stay away from Myra. Luane continues to spread rumors about almost everyone in town, with the help of her simpleminded husband, Ralph (Steve Monroe). "I only tell the truth," is Luane's claim, but it turns out she's selective about what she spills and what she keeps to herself. Several in the town have dark secrets, and since the bedridden Luane spends her days talking about them, they have their reasons for wanting her dead. The dark, brooding film is cast, for the most part, with unknowns, and of them only Fox went on to any kind of successful film career. She played the main character's dearly departed wife in the indie hit, Memento.

Critic Reviews for The Kill Off

It's rare that a woman directs a noir film and especially one as hard-boiled as this one.

There are no featured reviews for The Kill Off at this time.

The Kill Off Quotes