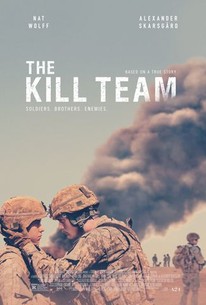 When Andrew Briggman (Nat Wolff), a young soldier in the US invasion of Afghanistan, witnesses other recruits killing innocent civilians under the direction of a sadistic leader, Sergeant Deeks (Alexander Skarsgård), he considers reporting them to higher-ups -- but the heavily-armed, increasingly violent platoon becomes suspicious that someone in their ranks has turned on them, and Andrew begins to fear that he'll be the next target. From writer-director Dan Krauss, and based on the same events that inspired his awardwinning 2013 documentary of the same name, The Kill Team is an urgent and explosive recounting of one of the darkest incidents in the not-so-distant history of American military exploits.

Critic Reviews for The Kill Team

Krauss handles the action and intrigue with cool precision, though, and Skarsgard, with nailbrush moustache, is often chilling.

The Kill Team's depiction of toxic masculinity and bloodthirstiness within the U.S. Army is blunted by an overly passive lead performance and a lack of specificity in its storytelling.

The Kill Team is lean, sincere, impassioned filmmaking, yet it fails to leave as much of an impression as it clearly wants to.

It's actually the second half I found the most compelling... I find the last 30 minutes the most interesting of all, but [director Dan Krauss] doesn't explore it as much as I wish he would.

It's a very intense film. It is thrilling, but knowing that this all actually happened made it a little bit different for me.

[Even] at only a scant 87-minutes I had trouble maintaining interest in all that was happening all the way through to the end.

By contrast, the new fiction film tends to suggest that the "Kill Team" was an aberrational exception in America's otherwise praiseworthy fighting force...

[Writer/director Dan] Krauss builds a level of suspense and emotional tension that ... serve as a painful reminder that serial killing in the context of war is an issue that will never be fully erased.

Much of the [film's] merit lies in the duel between its protagonists. [Full review in Spanish]

Hopefully, word-of-mouth is enough to make The Kill Team a hit.

In making Briggman less indecisive about the call to turn in his squad, the film doesn't allow for Deeks' justifications for his crimes to take hold.

Skarsgard excels in the film based on a true story and the 2014 Krauss documentary. Gripping. A must-see.

There are no featured reviews for The Kill Team at this time.