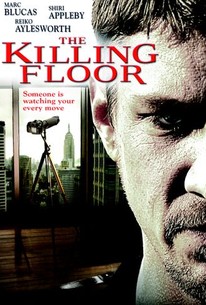 When a newly successful horror novel agent moves into a luxury penthouse apartment, the terror that follows far eclipses any frights he could have helped to publish on the written page. After years of struggling, David Lamont (Marc Blucas) has finally hit the big time. A literary agent who specializes in things that go bump in the night, Lamont has built his entire career on fear - and now that fear is about to return to him tenfold. Just as Lamont begins to get comfortable, photographs depicting a bloody crime scene in his very apartment turn up at his front door. Later, after receiving a videotape of him in his bed sleeping, Lamont begins to feel as if a malevolent stalker is tracing his every step. With each passing day, the grip of paranoia grows stronger. His mind soon consumed by paranoia and his thoughts clouded by lack of sleep, the frightened agent becomes so obsessed with discovering the identity of the stalker that he doesn't realize he is playing right into the madman's hands. Now, in order to solve the mystery of his own blood-curdling tale of terror, the man who made a mint by frightening the masses will be forced to venture deeper into the darkness than he ever anticipated.

Critic Reviews for The Killing Floor

The movie sets us up for a really killer payoff and then wimps out....

Audience Reviews for The Killing Floor

I thought this film was great! A very suspensful film full of vicious kllings and crazy twists. A Must-See!

A great movie!! This is definitely for you, if you dig the mystery/suspense genre. Marc Blucas truly amazes, but yet one feels compelled to relate to certain oppositions. Shiri Appleby is the ultimate star here, she truly gives viewers an interesting aspect of the many talented roles she has enacted. She is an amazing actress! Fascinating story plot! A must-see.

It's title seems quite promising, but I was bored most of the way through. Pretty much a predictable ending with a slight twist, which was most definititely the best few miniutes of the films VERDICT: Not recommended, this one's going straight to the awful list