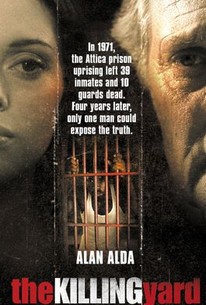 This made-for-cable drama was inspired by actual events that occurred in the wake of the 1971 inmate uprising at the Attica Correctional Facility near Buffalo, NY. Shango (Morris Chestnut) is a prisoner involved in the riot who has been charged with killing two men during the melee; Shango contends that he is innocent and that guards were responsible for the murders, but his words don't carry much weight with the authorities. Shango's fate appears to be sealed until an aging attorney (Alan Alda) and his youthful researcher (Rose MacGowan) step in to defend him in court. The Killing Yard (produced under the title Atikkka) debuted on the Showtime premium cable network on September 23, 2001.

Critic Reviews for The Killing Yard

There are no featured reviews for The Killing Yard at this time.