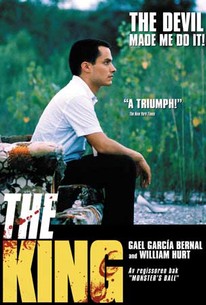 Critics Consensus: This disturbing film about the past coming back demanding its due evokes classical tragedy, but is ultimately too heavy-handed.

Critics Consensus: This disturbing film about the past coming back demanding its due evokes classical tragedy, but is ultimately too heavy-handed.

Critic Consensus: This disturbing film about the past coming back demanding its due evokes classical tragedy, but is ultimately too heavy-handed.

A young man exacts a thorough revenge against the father who abandoned him in this independent drama. Elvis (Gael García Bernal) is a young man in his early twenties who, after finishing a hitch in the Navy, learns that his biological father was Pastor David Sandow (William Hurt), a man of the cloth who has never taken responsibility for siring a child out of wedlock. Elvis travels to Corpus Christi, TX, to confront Sandow about his past; the pastor asks Elvis to let him break the news to his wife and children himself, and assures the young man he wants to stay in contact with him. Elvis, however, prefers to handle matters in his own way. First Elvis sets his sights on Malerie (Pell James), the pastor's teenage daughter, and after winning her trust, takes the girl's virginity. Malerie soon discovers she's pregnant, and after her older brother Paul (Paul Dano) sees Elvis slipping out of the house following a liason with the girl, he confronts the seducer and is stabbed and killed. Elvis manages to cover his tracks cleanly enough that no one is certain Paul is dead. Next, Elvis goes to great lengths to ingratiate himself with Sandow, and despite the objections of his wife (Laura Harring), the pastor eventually invites the man who killed his son and violated his daughter to live under the same roof with his family. The King was the first dramatic feature from director James Marsh, who previously distinguished himself in documentaries. ~ Mark Deming, Rovi

Michael Swanner
as Pace
View All

Critic Reviews for The King

The many possible ways to read the film might be more fruitful if Marsh's direction was more assured.

A showcase for big ideas that winds up feeling empty.

The King suffers from an overbearing sense of its own self-importance.

It really is reprehensible and disgusting, not only because we've seen far too many sociopaths in movies over the past 20 years, but because it deals with horrid clichés and presents them as something indie-hip and morally provocative.

A deeply involving film where intentions are as cryptic as the title, and the reckoning of past sins opens fresh wounds.

This is a religion-professing country that usually turns a cold shoulder to films with spiritual aspirations. The King has the very thankless task of doing God's work at the movies.

The degree to which this film is unsettling is testimony to the strength of the acting and direction.

Good work that, with a little more effort, could have been so much better.

This movie creeped me out big time.

An undemanding morality tale set in the Bible Belt.

Audience Reviews for The King

This movie is a bit f'ed, but I really like it. I saw it years ago and was delighted to find a $3 copy at the op shop recently. Stood up well to a rewatch, particularly as I had forgotten how it ends. Disturbed young man hunts down the father he never met, a devoutly religious man, and becomes romantically involved with his half sister (who had no idea they are related). Turns very dark by the end.

Somehow against all odds The King is dark yet somehow fulfilling. Bernal is terrific in a role where he hides who he really is. His actions seem to come off with no malicious intent despite the obvious destruction they could cause. It makes for an extremely creepy and twisted protagonist. This isn't someone who lurks in the shadows or gives you the evil eye from a distance, no twiddling of mustaches either. The revenge aspect is handled brilliantly to the point where it doesn't feel like a revenge film. It starts off with very gritty hand held camera work but as the film progresses to a more suburban local the camera settles and bright greens make it look like a pleasant world. This is also the time that religious aspects enter the film. Hurt has created an eden and left his past sins behind him but Bernal is a snake. The final integration of the King into the family environment is heartbreaking on all accounts as the metaphorical wrecking ball is just off in the distance. It's excellent stuff and crafted with care and passion without ever being heavy handed or inaccessible.

Interesting, but the dialogue seems somewhat clunky in places to me. Perhaps that's due to the upbringing of the characters, but I'm not sure. The cinematography and music are beautiful, but I don't think I like the film. It's a good film, I just don't engage with it very well. Still, what a way to conduct revenge.

[font=Century Gothic]In "The King", Elvis(Gael Garcia Bernal) has just been released from the navy and is heading home. Home in this case is Corpus Christi, Texas where his illegitimate father, David Sandow(William Hurt), is now a very successful preacher, married with a family of his own. His son, Paul(Paul Dano), is about to graduate high school and has been accepted at Baylor University, but not before trying to persuade his high school to teach intelligent design. His daughter, Malerie(Pell James), is a couple of years younger than Paul. David refuses to have anything to do with Elvis and does not tell his family about him. This does not stop Elvis from actively pursuing Malerie...[/font] [font=Century Gothic]"The King" is a good movie which is reminiscient of the morally ambiguous movies that Francois Ozon and Michael Haneke have made. It is unclear what Elvis' motives are or what he hopes to gain but it is clear that he does throw a wrench into David's carefully cultivated life. David is not a hypocrite but somebody who truly believes in God.(He distances himself from Elvis because he views him just as the result of a past indiscretion. Whether or not there is anything racist in his attitude is another question.) He does follow a stereotypical conservative behavior pattern in driving an SVU and hunting with his son while his daughter cooks and cleans. But in this film, Texas is pictured as being much more secular than its stereotype. [/font]