The King and Four Queens1956 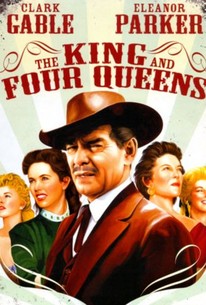 The King and Four Queens Photos

The King and Four Queens was the first (and last) project from Clark Gable's own production company, GABCO. Gable stars as Western fugitive Dan Kehoe, who hides out in a small ghost town. Here he whiles away his time with the town's only inhabitants: Ma MacDade (Jo Van Fleet), matriarch of the outlaw McDade family, and the four wives (Eleanor Parker, Jean Willes, Barbara Nichols, and Sara Shane) of Mrs. McDade's gunslinging sons. Three of the four McDade boys are dead; the fourth is expected to return at any minute with the loot from a recent stagecoach robbery. Since no one knows which of the McDades is dead, all four wives make a play for the bemused Kehoe; he in turn responds to their advances, hoping to get a share of the gold. The fur really begins to fly when it turns out that one of the wives is a phony who intends to double-cross the other three and ride off into the sunset with Kehoe. When The King and Four Queens proved a box-office disappointment, Clark Gable gave up the notion of producing his own films and returned to freelancing at the major studios.

Critic Reviews for The King and Four Queens

Light-hearted mix of the Western, mystery, comedy and romance.

Audience Reviews for The King and Four Queens

This is a boring movie I saw on TV, I didn't even watch it all since I was so bored with it, but if you like westerns and silly romance movies, maybe you'll enjoy it.

The King and Four Queens Quotes