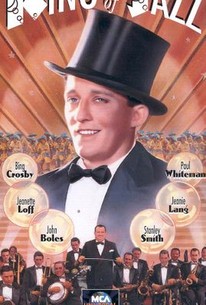 The King of Jazz Photos

Intended as Universal Pictures' entry in the "all-star musical" cycle of the early talkie era, King of Jazz is certainly the most elaborate of the bunch, though far from the most successful financially. Staged by Broadway impresario John Murray Anderson, the film is held together by the charismatic personality of rotund bandleader Paul Whiteman. The show begins with a Walter Lantz cartoon wherein it is recalled how Whiteman earned the title of the King of Jazz (Lantz's animated star Oswald Rabbit makes a brief appearance). Then Whiteman appears in the flesh (and plenty of it), coaxing his miniaturized orchestra out of a small box. The film then assumes the traditional revue format, with brief comedy sketches featuring such Universal contractees as Laura LaPlante and Slim Summerville interspersed with some of the most spectacular production numbers ever captured on film. The musical talent includes John Boles, the Rhythm Boys (with Bing Crosby), and "swing" violinist Joe Venuti. Highlights include a full-length "picturization" of Gershwin's "Rhapsody in Blue" (with Gershwin look-alike Roy Bargy at the piano), the surrealistic "Happy Feet", the splendiferous "Bridal Veil", and the gargantuan "Melting Pot" finale. The current Technicolor negative of King of Jazz, lovingly assembled from pristine original prints and battered dupes, runs 93 minutes -- some 12 minutes short of the film's original length.

Bing Crosby
as Himself (member of The Rhythm Boys)

Laura La Plante
as Herself

Paul Whiteman
as Himself

Walter Brennan
as Himself

Joan Marsh
as Bit
View All

Critic Reviews for The King of Jazz

A musical revue shot in early Technicolor and filled with eye-popping numbers, brief comedy sketches, and even a cartoon.

An uneven (the comedy was lame) but most entertaining historical musical revue celebrating early talkies.

If one can look beyond its troubling historical context, one finds a stunning compilation of musical and theatrical talent.

Audience Reviews for The King of Jazz

There are no featured audience reviews yet. Click the link below to see what others say about The King of Jazz!

The King of Jazz Quotes