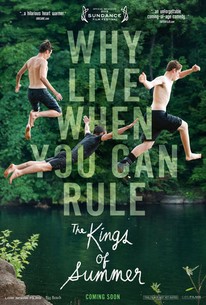 Critics Consensus: Thanks to charming performances and endearingly off-kilter spirit, The Kings of Summer proves to be a slight, sweet entry in the crowded coming-of-age genre.

Critics Consensus: Thanks to charming performances and endearingly off-kilter spirit, The Kings of Summer proves to be a slight, sweet entry in the crowded coming-of-age genre.

Critic Consensus: Thanks to charming performances and endearingly off-kilter spirit, The Kings of Summer proves to be a slight, sweet entry in the crowded coming-of-age genre.

The Kings of Summer Photos

Premiering to rave reviews at the 2013 Sundance Film Festival, THE KINGS OF SUMMER is a unique coming-of-age comedy about three teenage friends - Joe (Nick Robinson), Patrick (Gabriel Basso) and the eccentric and unpredictable Biaggio (Moises Arias) - who, in the ultimate act of independence, decide to spend their summer building a house in the woods and living off the land. Free from their parents' rules, their idyllic summer quickly becomes a test of friendship as each boy learns to appreciate the fact that family - whether it is the one you're born into or the one you create - is something you can't run away from. (c) CBS Films

Brian Sacca
as No Sideburns

Peter Karinen
as No Sideburns' Friend

Gillian Vigman
as Carol
View All

Critic Reviews for The Kings of Summer

The Kings of Summer can't quite decide between dysfunctional family drama, the aesthetics of floaty Americana, Goonies-brand adventurism and outbursts of rip-roaring comedy.

The reasons for raves at the Sundance Film Festival? The film's charm, freshness, wit and skewiness of vision.

Like a summer fling, forgotten as soon as you re-enter the real world.

It lollops along to its own lazy drumbeat, perfectly evoking that too-brief time of life when you could pass the evenings drunk on stolen beer and all the spare time you could dream of.

Coming on like Stand by Me meets Son of Rambow, the boys' adventure is essentially dreamy indie-teen wish-fulfilment.

The flaws are easy to forgive because newcomer Jordan Vogt-Roberts directs like a veteran and manages to infuse the film with so much visual wonder and authentic harmony.

Captures both the burning desire and the abject terror at the prospect of growing up.

The Kings of Summer is a sweet, funny, quirky and heartfelt coming of age story.

With wild, reckless abandon, the sweetness of friendship and first rumblings of affection, The Kings of Summer does manage to evoke the bloom of angsty adolescence.

Audience Reviews for The Kings of Summer

The kind of refreshing and funny indie dramedy tailor-made to charm everyone at Sundance, with its share of indie clichés and a director who seems very eager to show that he can direct, and it is worth seeing especially because of Nick Offerman and Moises Arias, both hilarious.

Decent movie. I expected to like it more, though.

A spectacular good time that shines with humor and drama. The best kind of guilty pleasure entertainment. A classic coming of age comedy that shines with brilliant humor, adventure, a great soundtrack and originality. A triumph for Director, Jordan Vogt-Roberts. It's absolutely wonderful and ambitious film. One of the years most tasteful, inventive and excellent surprises. A charming, unique, hilarious and heartwarming movie. An awesome and relate-able experience. The cast is so funny and has such great chemistry together. The performances from its young and gifted cast are all perfect. Nick Robinson, Gabriel Basso and Moises Arias are sensational. Arias gives a show stealing performance, he is so outrageous you have to see him work to believe what he can do.

***1/2 "Kings of Summer" is a kind of "Stand by Me"(there's been quite a few of those this year)type of movie. It's about 3 teenage boys who are fed up with their parents and their lives in general. So they go out in the woods and build a house and just hang out. The movie is very authentic to how friendship really is at that age. It really brought me back to my high school days and how me and my buddies would joke around. It's a very funny movie, actually one of the funnier films I've seen this year. The cast is mainly unknowns, save for Nick Offerman. Offerman plays one of the dads and he is hilarious. Between this and "We're the Millers" the guy is having an awesome year. The film does drag in parts and there are a few times where it tries to be an "artsy" movie. But don't let that keep you away, this is a very entertaining movie. One of those hidden gems that you don't hear about, but is definitely worth a watch. I bet this gets some Spirit Award(independent film) nominations at the end of the year. Good flick.

The Kings of Summer Quotes