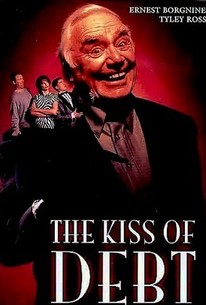 Derek Diorio's hilarious film stars Ernest Borgnine as a Mafia godfather with a penchant -- nay, obsession -- for opera. But there's one problem: He demands that the performers sing from his libretto, wielding his menace in the artistic arena just as he does with his other business. But the singers have had enough and decide to stage a revolt for the ages, aided by two wily allies. Who will win this tug-of-war? Might or music?

Critic Reviews for The Kiss of Debt

There are no critic reviews yet for The Kiss of Debt. Keep checking Rotten Tomatoes for updates!

There are no featured reviews for The Kiss of Debt at this time.

The Kiss of Debt Quotes