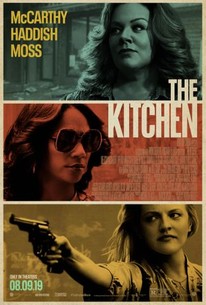 Critics Consensus: With three talented leads struggling to prop up a sagging story, The Kitchen is a jumbled crime thriller in urgent need of some heavy-duty renovation.

Critics Consensus: With three talented leads struggling to prop up a sagging story, The Kitchen is a jumbled crime thriller in urgent need of some heavy-duty renovation.

Critic Consensus: With three talented leads struggling to prop up a sagging story, The Kitchen is a jumbled crime thriller in urgent need of some heavy-duty renovation.

Based on the Vertigo comic book series from DC Entertainment, the film stars Oscar nominee Melissa McCarthy, Tiffany Haddish and Elisabeth Moss as three 1978 Hell's Kitchen housewives whose mobster husbands are sent to prison by the FBI. Left with little but a sharp ax to grind, the ladies take the Irish mafia's matters into their own hands--proving unexpectedly adept at everything from running the rackets to taking out the competition... literally.

News & Interviews for The Kitchen

The 69 Most Anticipated Movies of 2019
Weekend Box Office Results: Scary Stories Has Scary Good Opening, But Hobbs & Shaw Stays No. 1
Scary Stories to Tell in the Dark Is a Ghoulish Good Time

View All The Kitchen News

Critic Reviews for The Kitchen

The characters are all one-dimensional, the attempts at catharsis feel canned.

The problem with it is that it's incredibly unbalanced in the way that it doesn't ever know how to exactly deal with the sort of the tougher subject matter, the violence, which it deals with.

Moss, somehow, retains her dignity but McCarthy and Haddish are made to look like amateurs. I'm a fan of both women. Get me outta this kitchen.

The shallowness of the depiction would matter less if the story made a modicum of sense.

The best thing about this movie unfortunately is the soundtrack.

The film moves step-by-step from one scene to the next, but never has any narrative thrust.

The Kitchen should have been a showcase for both its stars and writer/director. Instead, it's a dumpster fire of a movie that makes little sense and is a black mark on the reputations of its many well-known actors.

Nothing quite adds up, character or story wise, and what might have been an interesting and timely look at dismantling of patriarchal structures it instead finds its female empowerment within violence.

The drama, storytelling, and performances are top-notch.

It's at its most interesting when seasoned screenwriter Andrea Berloff, making her directorial debut here, allows her movie to become genuinely nasty.

There are no featured reviews for The Kitchen at this time.