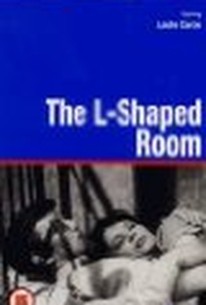 Considered ultra-mature film fare in 1962, The L-Shaped Room stars Leslie Caron as a unmarried, pregnant French girl. Arranging for an abortion (illegal at that time), she takes up residence in a ramshackle British boarding house where most of the other residents are also outcasts of society. Many of the character types were new to films of the era, but have since become cliches: the understanding young black, the lesbian actress, the prostitutes without golden hearts. There is also a Christopher Isherwood type writer (Tom Bell) who observes the passing parade and writes a book on the subject. Director Bryan Forbes brings his usual muted sensibilities to the project, resulting in a work that downplays the sensational aspects and emphasizes characterization. Surprisingly, while The L-Shaped Room was considered too "hot" for several corporate-owned American movie houses, it was an early arrival on 1960s TV, where it frequently ran uncut. ~ Hal Erickson, Rovi

Anthony Booth
as Youth in Street

Nanette Newman
as Girl at End

Stanley Morgan
as Waiter in Club

Gerald Sim
as Doctor in Hospital

Joan Ingram
as Woman in Park

Critic Reviews for The L-Shaped Room

In its dogged attempts to combine the old theatrical conventions with the new social subtlety is the commercial British cinema having its cake and eating it, or merely falling between two stools?

The similar Love with the Proper Stranger was a Hollywood picture, meaning it was required to ultimately pull its punches in time for an unconvincing denouement. Since it came from across the pond, that wasn't the case with The L-Shaped Room.

Everyone in the is doing superb work, but it's Caron's show.

This is an old-fashioned tearjerker tarted up with those social-realistic touches that now seem to be obligatory for every British film.

It's a fascinating depiction of London at the turn of the 1960s, just before The Beatles arrived to turn the country on its head, and well worth a revisit in this glorious 4k restoration.

Caron's heartfelt, out of type, performance as the lonely lady in trouble, makes the sensitive pic, a mixture of muddle and insight, watchable.

Glamorous Leslie Caron is seriously out of place in this drab kitchen-sink drama.

Leslie Caron received a second Oscar nomination for this British film, in which she plays a French feeme in London, who decides to keep her out of the wedlock baby.

Audience Reviews for The L-Shaped Room

There are no featured audience reviews yet. Click the link below to see what others say about The L-Shaped Room!