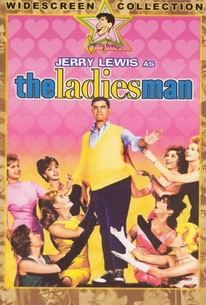 Comedian Jerry Lewis began directing movies in 1960, and this often unkind satire on the nature of American womanhood is one of his early efforts in that regard. The rubber-legged, rubber-faced Lewis plays Herbert, a man who is despondent over the break-up of his romance. While looking for a job, he comes across an impressive mansion (built as a set at the cost of $350,000) filled with women of all types -- and lo and behold -- they need a handyman. So Herbert gets to reside with a bevy of women of various types, all under the supervision of Mrs. Wellenmelon (Helen Traubel). In the end, the set itself outtrumps them all.

George Raft
as Himself

Harry James
as Himself

Jack La Lanne
as Himself

Westbrook Van Voorhis
as Himself

News & Interviews for The Ladies' Man

View All The Ladies' Man News

Critic Reviews for The Ladies' Man

In the end, the movie exalts the modest pleasures of everyday people, but, along the way, Lewis reveals the madder music within that they whistle while they work.

A bizarre, sexually ambiguous, cantankerously skeptical burlesque on the ascent of feminine independence.

This is one of Jerry's more creative comedies.

...it's hard not to be awed by the technological leaps of this production, and at their best his gags delve in to the realm of the surreal last visited by the Marx Brothers.

Jerry Lewis' The Ladies Man (1961) is yet another work of genius.

Creatively goofy thanks to his inspired insanity, Lewis is at his naughty best in this carousing comedy

Audience Reviews for The Ladies' Man

When it isn't funny (which happens quite frequently, to be honest), at least it holds out attention, but when it is, the film can make you laugh until you wet your pants (especially in a hilarious scene with Buddy Lester). Too bad it almost gets lost in its uneven last half hour.

One of the most brillhant, funniest and criative Jerry Lewis' movies. The Ladies Man, without a doubt a true masterpiece. Fresh.