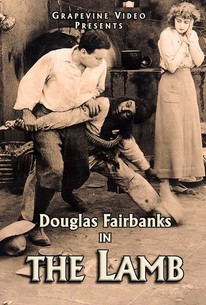 Fairbanks was an established star in Broadway theatre when he came to Hollywood and made this, his first film. A boy scout with the sensual appeal of a Satyr, he was an immediate success and it was this movie which catapulted him into the eye of the public. Heading out West to prove himself for the li'l woman, he uses every physical bit of daring-do he can come up to make his sweetheart proud. The movie was based on a D.W. Griffith story entitled "The Man and the Test."

Douglas Fairbanks
as Gerald
View All

Critic Reviews for The Lamb

There are no critic reviews yet for The Lamb. Keep checking Rotten Tomatoes for updates!

There are no featured reviews for The Lamb at this time.