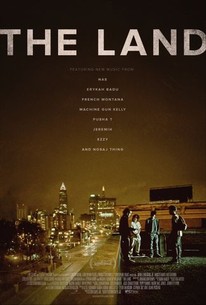 Executive producer Nas presents this vivid inner-city saga set amidst Cleveland's hip-hop underground. Teenage buddies Cisco (Jorge Lendeborg Jr.), Junior (Moises Arias), Boobie (Ezri Walker), and Patty Cake (Rafi Gavron) shrug off school to practice skateboarding, which they hope will be their ticket to a better life. In the meantime, they steal cars to finance their dream. But when they get mixed up in a drug deal and cross a ruthless crime queen-pin (Linda Emond), they put their friendship--and lives--on the line. Set to a choice hip-hop soundtrack and featuring an impressive ensemble cast that includes The Wire's Michael K. Williams, Erykah Badu, and rapper Machine Gun Kelly, The Land crackles with the energy and poetry of the streets.

News & Interviews for The Land

View All The Land News

Critic Reviews for The Land

The Land isn't a perfect film, but it is a hell of a good start, and director Caple Jr. -- and his young cast -- are artists to keep an eye on, for sure.

It also helps that the supporting players are, to a one, incredible.

Steven Caple Jr. is a filmmaker worth watching, here and in the future.

Caple has a unique eye and a strong sense of place. Here's hoping that next time he applies them to a fresher story.

Contrivances spoil the sense of realism and place that Mr. Caple, who wrote the script, often so deftly evokes.

Caple emphasizes the desperation that breeds street crime, and he never tries to puff his kids up into heroes. They're just kids who feel insulted by the few prospects that seem available to them.

The four young leads do phenomenal work, the characters and setting are fleshed out and authentic, and the supporting players are top notch (including an unexpectedly chilling villain).

It's ambitious to be sure, but not beyond Caple Jr's grasp and surely the start of a great career to come.

What could have been just another one of those typical, coming of age dramas can now be considered one of the summer's most influential films from one talented up and coming director, Steven Caple Jr.

Caple and his cinematographer Steven Holleran definitely get the look even if the story doesn't quite deliver, suggesting more and better to come in the future, especially if they get the opportunity to work from a more polished script.

The Land is dedicated to exposing the human story behind inner-city crime, and the film deserves credit for exploring a diverse cross-section of humanity.

I was blown away by this movie.

Audience Reviews for The Land

I'm excited to see what Steven Caple Jr. can do directing the Creed sequel after this film. This was filmed in Cleveland, OH where I live. It isn't like a tourism ad showing off the features that make Cleveland great, but instead takes place in the poorer neighborhoods often after dark. Still I take pride in my city be featured in a well-made indie like this. The coming-of-age story was written excellently by Caple with realism and an absence of clichés. The cast, especially Jorge Lendeborg Jr., Moises Arias, Rafi Gavron, and Ezri Walker, is uniformly wonderful. There have been many movies with teens torn between a life of crime and bettering themselves. With the different ways the tragic choices and circumstances affect each of the teen friends this film offers a unique view. It is a thrilling drama that surprised me in big ways.