The Land Before Time III: The Time of Great Giving (1995) 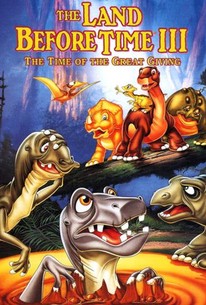 The Land Before Time III: The Time of Great Giving Photos

In this third installment of the animated saga of a young brontosaurus and his pals, trouble has come to the Great Valley in the form of a meteorite. It fell just beyond the valley and now blocks the main water supply. As the land dries and thirst increases, the different species of dinosaurs who once coexisted peacefully become fractious. Suddenly Littlefoot and his friends are no longer allowed to play together. As bigotry and bickering increase, Littlefoot's gang decides that it's up to them to save the day. Since they went outside the valley in the last sequel, they know where water can be found, and though the Great Beyond is populated by tyrannosauruses and other carnivores, the youngsters know that they and their parents must take that risk in order to survive.

Frank Welker
as Velociraptor
View All

Critic Reviews for The Land Before Time III: The Time of Great Giving

Milking the dinosaur franchise once again, and still OK fare for kiddies.

There are sufficient action scenes, however, to keep small persons attentive, and enough plot (the valley where the creatures live runs out of water and they argue over rationing while searching for a new source) to hold the action together.

... sweet and harmless little story that will delight kids who are into the series, but the underdeveloped and formulaic story line will disappoint adult viewers.

Audience Reviews for The Land Before Time III: The Time of Great Giving

All you need to do is see the title to know you oughta stay away from it, right? Seriously, the first Land Before Time is the only one worth watching.

I think this is where the series took a turn for the worst. They had an entire musical element to this, which really made me lose all faith. The animation was degraded even further and the dialogue is even more corny. I think it should've been left as one movie.

Slight improvement over number 2. The Time of the Great Giving has Littlefoot and Co. trying to find water for the great valley. I had weird flashbacks during this film, as a trailer for it was on the Balto VHS I used to own. So certain lines transported me back 14 years. The songs aren't as bad and are easily ignorable. There are some good messages here, not just about the obvious kiddie sharing crap, but also a message for parents on trying to teach and control their children with anger. It feels as though we get a lot more of the adults here, and there are enough action sequences to keep the pace going.

The Land Before Time III: The Time of Great Giving Quotes