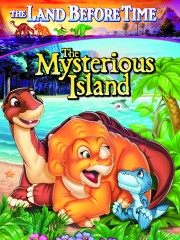 The Land Before Time V: The Mysterious Island

The Land Before Time V: The Mysterious Island Reviews

Super Reviewer
Michael E
March 29, 2018
my absolute favorite of the sequels i love the scenes when they are all on the island which that whole scene is the best scene in the whole movie, interacting, and having fun with chomper

Sheryl K
August 23, 2015
It is a good family movie. This is actually better than the first two sequels. It is also very entertaining.

John B
September 1, 2014
Nice children's animated movie and continuation in the spirit of this series

Harry W
½ July 29, 2014
With a disappointing predecessor, it seemed sensible to go into seeing The Land Before Time V: The Mysterious Island with fairly low standards.

So The Land Before Time V: The Mysterious Island is a film which can only go so far, but it manages to make itself the best in the series of Land Before Time sequels so far by using colourful animation, a nice amount of energy and humour, and a new kind of story with effective subject matter

absolutely my favorite movie of the long-running series
the big reason why this movie topples all the others is that we get to re-visit a familiar face, Chomper from the 2nd movie
our heroes must find food and water in order to keep the herds from separating
they face many new obstacles: swimming sharptooth, drowning at sea and avoiding Chomper's parents from devouring them
Cera also tries to convince Littlefoot and the others that Chomper is nothing but a meat-eater which is a big metaphor for her prejudice
the kids of course come to terms with their identity's and that it's unchangeable
the songs are also much better and catchier
'The Mysterious Island' is a rare sequel to 'Land Before Time' that suits well

Dammy G
½ November 11, 2012
Okay okay. Not everything comes on time. I'm sure the asteroid will kill them next time.

gustavmarkovic31 .
September 12, 2012
unfunny and uncalled for, the fifth installment of TLBT series is boring and stupid, like a lumbering oaf in the pitch dark, looking for its black shoes, which are half way to mexico.

Kevin L
½ August 15, 2012
It might not be as thought-provoking as its predecessors, but The Mysterious Island has some new original elements to make it still enjoyable

Dayna H
August 5, 2012
This should have been the end of the series. Since this one, the character voices and the animation style continue to change, and the music and story lines get worse and worse.