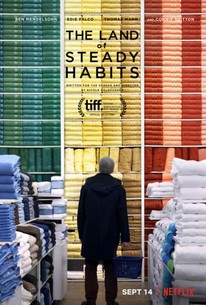 Critics Consensus: With typically sharp work from writer-director Nicole Holofcener and finely layered performances, The Land of Steady Habits is one mid-life crisis worth watching.

Critics Consensus: With typically sharp work from writer-director Nicole Holofcener and finely layered performances, The Land of Steady Habits is one mid-life crisis worth watching.

Critic Consensus: With typically sharp work from writer-director Nicole Holofcener and finely layered performances, The Land of Steady Habits is one mid-life crisis worth watching.

The Land of Steady Habits Videos

The Land of Steady Habits Photos

Writer/director Nicole Holofcener (Enough Said, Friends with Money) brings us a drama about parenting, loss and the consequences of our self-destructive behavior. The story features a deeply flawed male protagonist whose tragic mistakes impact and inform the complex relationships in his life. Far from a recognizable tale of a middle-aged rake in crisis, this is an emotionally resonant portrait of a fractured family explored by one of our most keenly observant directors. Feeling trapped in the stifling, wealthy enclave of Westport, Connecticut, Anders Hill (Ben Mendelsohn) retires from his job in finance and leaves his wife (Edie Falco) in the hopes that it will renew his lust for life. However, he's quickly faced with the startling reality of his choices; he spends his days looking for things to decorate his empty shelves, sleeping with strangers and feeling terribly lost. Missing his ex-wife and on the outs with his troubled 27-year-old son (Thomas Mann), Anders befriends a drug-addicted teen (Charlie Tahan), sending him down a path of reckless and of deeply regrettable behavior. His shameful actions cause him to question who he is as a father and, ultimately, who he is as a person. Adapting her screenplay from Ted Thompson's 2014 novel, The Land of Steady Habits also stars Connie Britton, Elizabeth Marvel and Bill Camp.

Critic Reviews for The Land of Steady Habits

The film is smart, intelligent and one of the best from this always interesting director.

It's Holofcener's first film for Netflix, which may be ruthlessly fitting given its attack on staid domestic archetypes and middle-class mores.

A great actor when his motor is running fast, Mendelsohn is surprisingly attractive at slower speeds and better when Holofcener makes him twist.

Laying it all out with a piercing authenticity, Holofcener makes us hope that the wait till her next feature is not quite so long.

The decision to spend a little time on a lot of different characters results in a splintered story that muddles - rather then clarifies - its protagonist's roundabout journey back to himself.

Really bad decisions are made, people lie, no one convincingly grows. Lest this be taken as biting commentary, the music, stilted dialogue and epilogue assure us it's in earnest.

Thanks to its humanistic acting and carefully constructed writing, The Land Of Steady Habits is a poignant depiction of a man trying to find a new lease.

[A]side from its technical fluency and a typically effortless performance from Ben Mendelsohn, this self-pity party feels a decade too late.

Characters spend most of their time wandering through grocery stores and wine depots. None of it gets satirized as hard as it should.

I like this movie. It is dark, but it also has a lot of humor in it. It also has the benefit of having characters capable of a bit of very unlikely redemption.

Holofcener is right to call it "a sad, small story," as beyond the warm performances the constant thrum of moneyed self-indulgence occasionally palls...

The story line never had much urgency and the life lessons were dished out as easy as choosing bath towels.

Audience Reviews for The Land of Steady Habits

One of the better movies about suburban ennui. Holofcener understands that each character's unhappiness is deeper than mere dissatisfaction.

The Land of Steady Habits Quotes