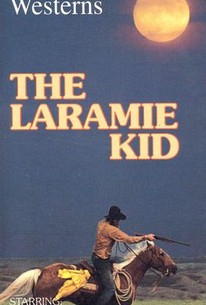 From small-scale Reliable Pictures, The Laramie Kid starred the strapping Tom Tyler as a cowboy returning home to help his girlfriend (Alberta Vaughn) save her ranch from a ruthless usurper. Promising the girl to blast the town wide open in order to get the necessary funds, Tyler soon finds himself unjustly accused of robbing the local bank. While Tyler is away in prison, Vaughn discovers evidence of his innocence, and rather than have the girl face the real culprit alone, our hero makes a daring escape. Produced and directed by Harry S. Webb, The Laramie Kid is typical of the era's better independently-made horse operas: technically crude but consisting of nary a dull moment. Tyler makes a strapping hero and an august cast that also includes Al Ferguson, Murdock MacQuarrie, George Chesebro and, for comedy purposes, Snub Pollard keep interest alive throughout.

Critic Reviews for The Laramie Kid

There are no critic reviews yet for The Laramie Kid. Keep checking Rotten Tomatoes for updates!

There are no featured reviews for The Laramie Kid at this time.