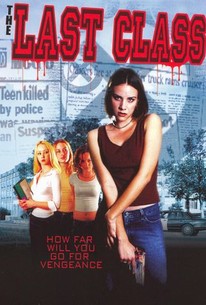 A high school girl falls in with a gang of embittered misfits dedicated to making the popular kids suffer. Family life isn't easy for Nicole (Kristy O'Leary; after her mother vanishes without a trace, she's forced to go live with the father she never knew. When Nicole fails to click with the cool kids at her new school, local outcast Derrick (Billy Findley) takes her under his wing and shows her that there's more to life than the social scene. But Derrick has a dark secret: he and his friends have endured the humiliation of their peers for far too long, and now they're preparing to strike back with lethal force. Desperate for acceptance at any cost, Nicole accepts Derrick's invitation to join the ranks of the rejected while gradually unearthing evidence of their diabolical plan.

Critic Reviews for The Last Class

There are no critic reviews yet for The Last Class. Keep checking Rotten Tomatoes for updates!

There are no featured reviews for The Last Class at this time.