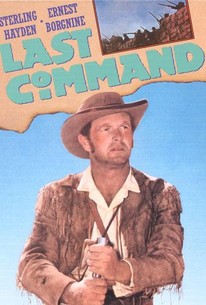 The Republic super-production The Last Command is a partial remake of the same studio's Man of Conquest (1939). But whereas the earlier film concerned itself with the exploits of Texas patriot Sam Houston, Last Command concentrates on Houston associate James Bowie, played by Sterling Hayden. When Texas is threatened by the armies of Mexican general Santa Ana (J. Carrol Naish), Bowie at first adopts a policy of peaceful coexistence. When this proves impossible, Bowie joins Davy Crockett (played as an irascible old cuss by Arthur Hunnicut) and the rest of the courageous defenders of the Alamo. The climactic confrontation between the heroes of the Alamo and Santa Ana is long in coming, but well worth the wait. Frank Lloyd's large-scale direction and the vibrant musical score of Max Steiner imbues Last Command with a "major studio" aura not often found in Republic productions.

Russell Simpson
as The Parson

Critic Reviews for The Last Command

The exceptional variety of this cast is underlined and deepened by much stronger directing of the actors than is common in a genre where character psychology remains mostly conventional, hence superficial.

The Last Command (1955) is not exceptional but is enjoyable.

Starring Sterling Haydn, Ernest Borgnine and Anna Marie Alberghetti, this stodgily cooked slab of history is memorable only for its battle scenes, which are truly rousing.

There are no featured reviews for The Last Command at this time.