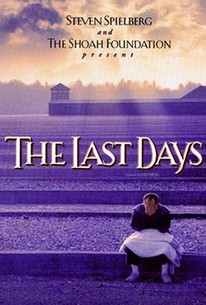 Steven Spielberg is the executive producer of this documentary, directed by James Moll, detailing the experiences of five Hungarian Jews who survived the Holocaust and are currently United States citizens. Made in black and white and color, the film also intercuts old photographs and archival films -- including some recently discovered concentration-camp footage shot in color. Shown at the 1998 Mill Valley Film Festival.

Critic Reviews for The Last Days

It offers powerful testimony to the ravages of hatred, and the resiliency of the human spirit.

Let it be said up front that the unspeakable has to be spoken -- that every scrap of testimony to the Holocaust must somewhere be recorded; that the survivors and historians should insist on preserving every syllable...

Still very much one of the most powerful Oscar-winning documentaries of the last quarter century.

Perhaps more pointedly than other documentaries on this subject, The Last Days movingly shines a harsh light on the last-ditch spasm of murder the Nazis engaged in.

A life-affirming and moving experience that should not be missed.

A handful of mesmerizing stories; a film full of hellish, irrational memories; a future filled with hope, of faith in life renewed.

Conscientiously brings to life a grotesque chapter of history that had no aim but slaughter.

Every ongoing piece of documentation of the single most horrendous period in the history of mankind is needed...

Audience Reviews for The Last Days

There are no featured audience reviews yet. Click the link below to see what others say about The Last Days!