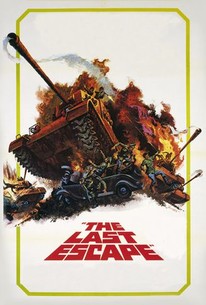 Captain Lee Mitchell (Stuart Whitman) is the American officer who joins the British in an attempt to smuggle scientist Von Heinken (Pinkas Braun) out of Germany. The group also assists refugees trying to escape the wrath of the Nazis. Mitchell must quickly mold an inexperienced unit of British soldiers into an effective unit before the Russian tank squadron invades Munich. SS troops and Allies engage in fierce combat as both sides try to capture the noted scientist in this routine World War II drama. The film was made in 1968 but not released until 1970. ~ Dan Pavlides, Rovi

Critic Reviews for The Last Escape

There are no critic reviews yet for The Last Escape. Keep checking Rotten Tomatoes for updates!

There are no featured reviews for The Last Escape at this time.