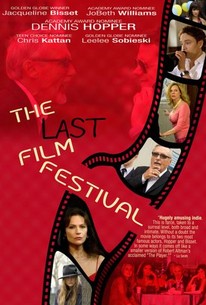 There are over 4,000 film festivals around the world. Where would you go if your film was turned down by 3,999 of them? When an obscure film festival is the last hope for a failing producer (Dennis Hopper) and his "disaster" of a movie collides with the homespun innocence of small town America, neither will ever be the same. Nick will do anything to get his film distributed, including manipulating his dysfunctional cast into attending the festival where Hollywood egos hilariously slam into small town politics.

The desultory finished product would be unwatchable if not for the grounding presence of the two leads and JoBeth Williams' supporting turn.

The late Dennis Hopper's IMDB acting credits are 200-strong, but any qualitative ranking of those titles would put his last completed movie, "The Last Film Festival," somewhere at the bottom.

The Last Film Festival runs ninety minutes. I wish I had run in the opposite direction with unseemly haste. (It bears no relationship to Hopper's fascinating excursion into the jungle, The Last Movie.)

"The Last Film Festival" doesn't have the precision to successfully slap around the setting, but it does have Hopper, who's part of an ensemble trying their best to make sure co-writer/director Linda Yellen has something to work with.

There are no featured audience reviews yet. Click the link below to see what others say about The Last Film Festival!