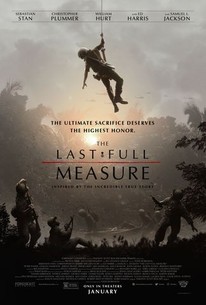 Critics Consensus: The Last Full Measure struggles to capture the incidents that inspired it, but ultimately prevails thanks to strong performances in service of a remarkable true story.

Critics Consensus: The Last Full Measure struggles to capture the incidents that inspired it, but ultimately prevails thanks to strong performances in service of a remarkable true story.

Critic Consensus: The Last Full Measure struggles to capture the incidents that inspired it, but ultimately prevails thanks to strong performances in service of a remarkable true story.

THE LAST FULL MEASURE tells the true story of Vietnam War hero William H. Pitsenbarger (Jeremy Irvine), a U.S. Air Force Pararescuemen (also known as a PJ) medic who personally saved over sixty men. During a rescue mission on April 11, 1966, he was offered the chance to escape on the last helicopter out of a combat zone heavily under fire, but he stayed behind to save and defend the lives of his fellow soldiers of the U.S. Army's 1st Infantry Division, before making the ultimate sacrifice in the bloodiest battle of the war. Thirty-two years later, respected Pentagon staffer Scott Huffman (Sebastien Stan) on a career fast-track is tasked with investigating a Congressional Medal of Honor request for Pitsenbarger made by his best friend and PJ partner on the mission (William Hurt) and his parents (Christopher Plummer & Diane Ladd). Huffman seeks out the testimony of Army veterans who witnessed Pitsenbarger's extraordinary valor, including Takoda (Samuel L. Jackson), Burr (Peter Fonda) and Mott (Ed Harris). But as Huffman learns more about Pitsenbarger's courageous acts, he uncovers a high-level conspiracy behind the decades-long denial of the medal, prompting him to put his own career on the line to seek justice for the fallen airman.

The Gentlemen is Vintage Guy Ritchie

Boasting a powerhouse cast, The Last Full Measure has the best of intentions, to celebrate servicemen without condoning war, but winds up with little else.

Here's a true story about a young soldier's exceptional bravery and sacrifice made into a pretty average war movie, insubstantial and TV-ish despite the appearance of some decorated Hollywood veterans.

In his final role, Fonda is given room to be wonderful - and so, of course, he is.

One of the strengths of Todd Robinson's film lies in the casting of a gallery of fine actors in almost every role.

Not bad for a regulation military movie, but I must confess to a wandering attention span; how else could I notice the cigarette that Jackson removes from the pack of Marlboros is an American Spirit?

The meticulous script and sensitive direction signal in Todd Robinson the virtues of a major filmmaker at work.

How can a film starring Samuel L. Jackson, Christopher Plummer and Ed Harris be this dull?

Ultimately, The Last Full Measure doesn't reach the level of an exceptional drama, but its heart is in the right place, and it offers a well-told story - one likely to resonate strongly with those affected one way or another by war.

As well-intentioned as the film's messages of respect for the sacrifices of the fallen are, The Last Full Measure succumbs to melodrama at almost every turn.

The writing remains honest to the true events and gives its viewers and protagonists a befitting closure...

The way the story is told is fresh, the violence is not sensationalized at all, and the acting is top-notch.

There are no featured reviews for The Last Full Measure at this time.