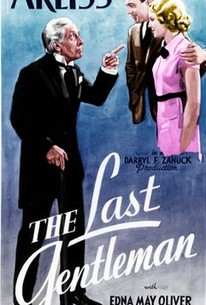 Dying New England millionaire Cabot Barr (George Arliss) doesn't trust any of his relatives as they flock to his bedside, and not without justification. Barr realizes that there's a few roses among the thorns, notably his good-hearted granddaughter (Charlotte Henry) and his likeable adopted nephew (Frank Albertson), but the rest of the batch are whining, greedy and manipulative. With the covert aid of his secretary (Ralph Morgan) and his Runyonesque valet (Edward Ellis), Barr decides to teach his family a few lessons by manipulating them to do the opposite of what he pretends he wants them to do. As a result, the granddaughter and the nephew fall in love, while the less-appealing relatives are enmeshed in their own webs of deceit. The best, however, is saved for last. After Barr's death, the family discovers that he's left behind a "living will:" a reel of film in which the old gent jovially announces his bequests -- and with equal joviality settles a few old scores. This climactic "gimmick," later repeated in such films as 1979's Cat and the Canary and 1985's Brewster's Millions, is the highlight of this consistently charming and delightful George Arliss vehicle.

Edna May Oliver
as Augusta

Critic Reviews for The Last Gentleman

...so crammed with sentimental rubbish that it would make an author of birthday greeting cards blush with inferiority.

The whole family can go to The Last Gentleman and come away greatly edified, convinced of the rewarels of goodness and the awfulness of greed.

The picture has one really hilarious and unexpected bit of farce [which] stands as a great relief to the rest of the film, which is pretty much a stock affair.

There are no featured reviews for The Last Gentleman at this time.