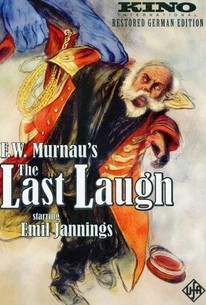 F.W. Murnau's German silent classic The Last Laugh (Der Letze Mann) stars Emil Jannings as the doorman of a posh Berlin hotel. Fiercely proud of his job, Jannings comports himself like a general in his resplendent costume, and is treated like royalty by his friends and neighbors. The hotel's insensitive new manager, noting that Jannings seems winded after carrying several heavy pieces of luggage for a patron, decides that the old man is no longer up to his job. The manager demotes Jannings to men's washroom attendant, and the effect is disastrous on the man's prestige and self-esteem. Logically, the film should end on a note of tragedy, but Murnau (either because he was ordered to by the producers or because he just felt like it) adds a near-surrealistic coda, wherein Jannings, having suddenly inherited a fortune, returns to the hotel in triumph. The Last Laugh was a bold experiment for its time: a film told entirely visually, with no subtitles save for the semi-satirical explanation of the climax. In a sense, Karl Freund's camera is as much a "character" as anyone else, commenting upon Jannings' rise and fall via then-revolutionary camera angles, jarring movements and grotesque lens distortions. Many historians credit The Last Laugh as the vanguard of the "German invasion" of Hollywood during the mid- to late-1920s. ~ Hal Erickson, Rovi

Kurt Hiller
as The Daughter's Fiance

Max Hiller
as The Daughter's Fiance

[Jannings's] impersonation of, or rather his mingling with, the character of the old porter, is solid, various, touching to a degree one had not thought possible, and makes even the best moments of Charlie Chaplin seem little heavy and self-conscious.

Karl Freund's ground-breaking and historically important cinematography can still take the breath away.

The 1924 film in which F.W. Murnau freed his camera from its stationary tripod and took it on a flight of imagination and expression that changed the way movies were made.

The Last Laugh can really best be understood as a horror story.

There are no titles in this film -- merely a few inserts to guide the viewer. And yet one is never in doubt as to the action of this admirable picture, which is a remarkable piece of direction, with exquisite lighting effects.

The film would be famous just for its lack of titles, and for its lead performance by Emil Jannings, which is so effective that both Jannings and Murnau were offered Hollywood contracts and moved to America at the dawn of sound.

Told without intertitles, but with extraordinarily advanced visual fluidity thanks to the technical innovations of the director's frequent cinematographer Karl Freund...

Here is a marvelous picture -- marvelous in its simplicity, its economy of effect, its expressiveness and its dramatic power.

From Murnau's inventive visual storytelling to Jannings' wonderful performance, The Last Laugh is the perfect film to begin one's journey into the world of Weimar cinema.

The Last Laugh has a Dickensian lovability.

The Last Laugh is a progress: it is not parasitic on any novel or play, does not resemble any literary form at all. It contains one of the finest pieces of sustained character-acting yet seen.

a groundbreaking film in nearly every possible way and one of the finest achievements of the silent era. it's broadly played but flows beautifully and contains only one title card! magnificent!

Great lighting and high contrast German silent film. It's a nice slice of life in 1924 Berlin. The famous director F.W. Murnau evokes many emotions. It's a work of art to look at. It feels really long and is sad. I felt sorry for the old walrus-moustached hotel doorman who lost his proud position.

A brilliant movie with great actors, director, and story. A classic.

[font=Century Gothic]With exquisite production design to accentuate the vast differences between the worlds of the luxury hotel and working classes, "The Last Laugh," directed by F. W. Murnau, is a heartbreaking movie about a hotel porter(Emil Jannings) who has been working for the same hotel for decades and takes great pride in doing his job. For him, his work is simply everything. On a day like any other, he takes a heavy trunk off an automobile unassisted in a driving rain storm. It is only understandable that after such an arduous task that he requires a little breather afterwards. But the hotel manager(Hans Unterkircher) does not see it the same way, replacing the porter with a younger man the next day and demoting the former porter out of sight downstairs to attend to the restroom. Like so many, he is simply pushed to the side at the end of his career.[/font]