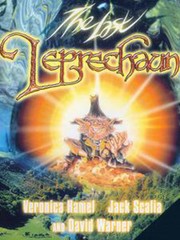 "Let's forget about the children, just for a moment."

David Lister, director of The Scorcerer's Apprentice, Beauty and the Beast (2009), Malibu Shark Attack, Trigger Fast, Killer Instinct, and Panic Mechanic delivers The Last Leprechaun. The storyline for this picture is pretty cliché for the family genre and the characters were just okay. The acting was below average and the cast includes Jack Scalia, Veronica Hamel, David Warner, and Brittney Bomann.

"Sometimes I think he wishes we died in the car accident instead of mommy."

I grabbed this off Netflix and initially thought it would be a cartoon based on the cover (it wasn't). This movie reminded me of Munchie in the way the leprechaun was delivered and the overall premise of magic. This movie is a below average addition to the genre and turned out a little disappointing for me.