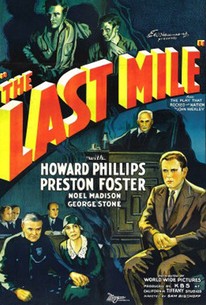 The Last Mile is the film version of the 1930 John Wexley play which previously brought stage fame to both Spencer Tracy and Clark Gable. Wrongly accused of murder, young businessman Richard Walters (Howard Phillips, repeating his stage role) is sentenced to Death Row. Here he gets swept up in a jail break engineered by the desperate Killer Mears (Preston S. Foster), who grabs the keys of a guard and takes control of the cell block, holding the guards as hostages and freeing the other condemned prisoners. Refusing to accede to Mears' demands for a fast car and head start, the warden precipitates a bloodbath, with Walters caught in the middle of the fray. Ultimately, however, Mears sacrifices his own life in hopes of sparing Walters. In the original play, the Richard Walters character was guilty and went to the electric chair halfway through the first act; in the film, Walters's pathetic farewell speech and "long walk" were inherited by secondary character Berg (George E. Stone). Fairly strong stuff for its time, The Last Mile is actually superior to its more explicit 1959 remake, which starred Mickey Rooney as Killer Mears.

Alec B. Francis
as Father O'Connors

Jack Kennedy
as O'Flaherty
View All

Critic Reviews for The Last Mile

Too stagy and overacted.

Audience Reviews for The Last Mile

There are no featured audience reviews yet. Click the link below to see what others say about The Last Mile!