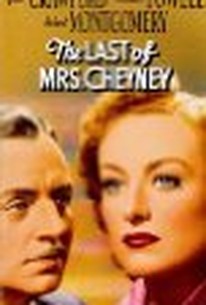 There is a big charity function at the house of Mrs. Cheyney and a lot of society is present. With her rich husband, deceased, rich old Lord Kelton and playboy Lord Arthur Dilling are both very interested in the mysterious Fay. Invited to the house of the Duchess, Fay is again the center of attention for Arthur and Kelton with her leaning towards stuffy old Kelton. When Arthur sees Charles, Fay's Butler, lurking in the gardens, he remembers that Charles was a thief caught in Monte Carlo and he figures that Fay may be more interested in the pearls of the Duchess, which she is. After Fay takes the pearls, but before she can toss them out the window, she is caught by Arthur who is very disappointed in how things are turning out.

Critic Reviews for The Last Of Mrs.Cheyney

There are no critic reviews yet for The Last Of Mrs.Cheyney. Keep checking Rotten Tomatoes for updates!

Audience Reviews for The Last Of Mrs.Cheyney

I was excited about this movie as it had some of my favorites: Crawford, Powell, and Montgomery. It was kind of a letdown. It wasn't a bad story, but I thought Crawford was out of her element in this, which is to say she isn't suited for comedic material methinks. Powell was fantastic as always but underused. The few scenes that Powell had with Montgomery were magic. The story itself was okay, especially in the beginning, but the ending just didn't click. Worth watching if you run across it on tv, but I wouldn't advise traipsing all over town looking for it.

Everyone looks great and is too, too refined and that's the problem. Except for William Powell nobody is that urbane all the time so it all feels stiff and dated.

The Last Of Mrs.Cheyney Quotes