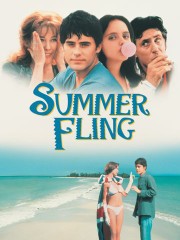 The Last of the High Kings

The Last of the High Kings Reviews

Scott A
½ May 12, 2013
Okay, I saw this under the title of SUMMER FLING...and honestly, neither title make any sense. Yeah, it takes place over a summer, but there is no fling and I have no idea what the Last of the High Kings means either.

And mild spoiler here, despite being on the cover of both versions, and totally miss-spelled on this one, Christina Ricci is barely in this film. She doesn't show up until a good half hour into the film, and she leaves maybe 15 minutes later.

Leto is okay, but his accent is crazy sounding on him. And O'Hara just plays an over the top crack pot.

For your sexy part, you get best friends Emily Mortimer and Lorraine Pilkington, both of which who Leto pines for. Not really clear on what if anything happens between them all sadly.

I don't know, the film just isn't very fun to watch. Leto is counting down the weeks until he gets his test results to see if he can go on to college or not. He seems to totally ignore Ricci throwing herself at him, and he really only has a fling for like two minutes of the summer.

Just not a very interesting film, despite a good cast.

Yvonne A
½ December 23, 2012
Alright movie, about a dysfunctional family & a young man who looses his virginity

Alex M
½ February 22, 2011
O'Hara was doing her crazy part greatly! Ricci was doing perfect, for what she had to do. The story is nice, it's about a young man who doesn't really know what he wants. He might thinks he knows, but he doesn't. It's normal, when you're 17years old, you wanna sleep with every woman, even if you don't fancy her.

MaryG T
July 20, 2009
I really love this film because it's sweet and well made. It's not so famous but i think it's worth seeing.

WS W
½ May 28, 2009
Like [What's Eating Gilbert Grape] but a lot lighter, a cute, bitter-sweet story about how a coming of age boy taking off his life, in addition to its Irish background. The fabulous Catherine O'Hara with the very young Jared Leto, Emily Mortimer, Christina Ricci.

Elaine M
April 29, 2009
Very unspecial teen summer movie following Irish 17-year-old Frankie Griffin as he endures a long empty summer between finishing school and receiving his exam results. The accent is convincing right through, especially by Jared Leto, and the acting is fine (and Christina Ricci chearleading on a bus is worth sitting through the whole movie for), but really the movie is lame, and the way the storyline develops towards the end is horrific. Catherine O'Hara actually has one of the more respectable characters, and she's completely mental in this (but brilliantly acted), and the rest are just all horrible boring people. Don't bother unless you are criminally obsessed with Christina Ricci, which of course I am not...

Alexis S
March 17, 2009
That was 1 hour and 41 minutes I can never get back... Catherine O'Hara is nucking futs in this movie. Completely insane. Christina only had a minor part :( I was hoping they'd bring her back later on in the movie. Pathetic. Just utterly pathetic. The "party" was hardly anything.

max p
February 5, 2009
im not sure how christina ricci gets such a billing in this movie shes in it for like 2 minutes

Dorothy I
January 9, 2009
This movie was surprisingly great. I really liked Jared Leto and Catherine O'Hara's character. The accents were great and I wasn't distracted like I normally am by terrible accents from American actors. The story line was run of the mill, but I love that kind of stuff. Loved it.

Manda C
½ November 11, 2008
Average film that tends to lag towards the end. Jared Leto almost pulls off the Irish accent.

↑jessie.
October 10, 2008
Loved the accent. Caught my off my feet. So hilarious. I was dying at every line that Jared delivered!! HAHAHA OH DUDE IT WAS FUN. Extremely strange, but great actors. Loved it.

Bryce L
½ August 7, 2008
Pretty good film overall. Its so funny hearing all of these American actors trying to talk with Irish accents. I hope I never see Jared Letos ass again.
Page 1 of 4