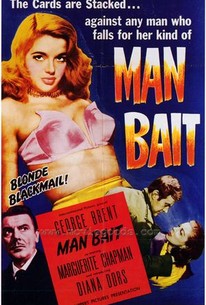 The Last Page was the original British title for the 1952 murder meller Man Bait. Hollywood's George Brent plays a married bookstore owner who is blackmailed by scheming Diana Dors. The subsequent chain reaction of events leads to the death of Brent's invalid wife. It gets worse when Dors is killed by her partner-in-crime Peter Reynolds, and Brent is accused of the crime. The bookseller's faithful secretary Marguerite Chapman comes to the rescue. As with many British programmers of the 1950s which starred American actors, The Last Page was distributed in the U.S. by Lippert Productions. ~ Hal Erickson, Rovi

Isabel Dean
as May

Hammer's Fisher builds tension and pulls off a decent thriller.

This is from the Hammer Film Noir Double Feature Collection. The plot centers around a bookstore where Dors' character, Ruby, works. She is the "bad girl" of the office, arriving late and hitting on her boss, played by George Brent. But that's nothing compared to the trouble she gets herself into after going on a date with a man she catches trying to steal a valuable book from the store! He (very easily) convinces her to blackmail her boss and things really go downhill from there. I won't give away more of the plot, because the unexpected twists and turns it takes are half the fun of this film - the other half is provided courtesy of the excellent British character actors who make up the cast. No part is too small to make you notice them! This film noir was directed by the great Terence Fisher for Hammer Films - who together would go on to unleash a slew of excellent Gothic horror films in the 1950's and 60's. A young, brunette Diana Dors easily walks away with the picture harnessing a killer combination of alluring presence and a very natural acting ability. 3 1/2 stars 3-25-13